I’ve been busy marking and scheming over the last two weeks but I’m now back with a new Archaeodeath blog entry!

In a previous entry, I outlined a long-running book project I have been working on, now contracted with OUP and due for publication in 2016. This is now called ‘Archaeologists and the Dead: Mortuary Archaeology in Contemporary Society‘. The book looks at the intersection between mortuary archaeology, contemporary archaeology and public archaeology through 18 original research chapters, an Introduction by editors Mel Giles and myself, and a concluding Commentary by Professor Lynne Goldstein.

The book has a British and European focus, but papers also touch on the American and global scene too. There are sections looking at interactions and contexts in which mortuary archaeology operates to engage and relate to wider contemporary society during fieldwork, in the museum environment and through various media and popular cultures. I am all set to get the final draft manuscript back to OUP by 1st July so that production can begin. It is an exciting time creating a truly unique and distinctive book, the likes of which haven’t been attempted before.

In my previous experience with this kind of situation, publishers like the easy route of selecting an image from inside the book itself. Within our book there are plenty of images we could use, of bog bodies, mummies, skeletons, disarticulated and cremated human remains, and various images of cemetery excavations and artist’s visualizations of past funerals. Mel (my co-editor) and I might chose one of these. The publishers might have a view on which makes the book most marketable.

Still, I am putting forward another suggestion; one which might not prove the final decision, but one that raises a series of issues in itself. The photograph is taken by me in 2012 and it is of a medieval sarcophagus containing an adult skeleton on display at Norton Priory, Cheshire. The reasons I like this are as follows:

In all likelihood, this won’t be the final front-cover choice for the book. Still, views on the use of the archaeological dead to promote academic work and sell books are very welcome. 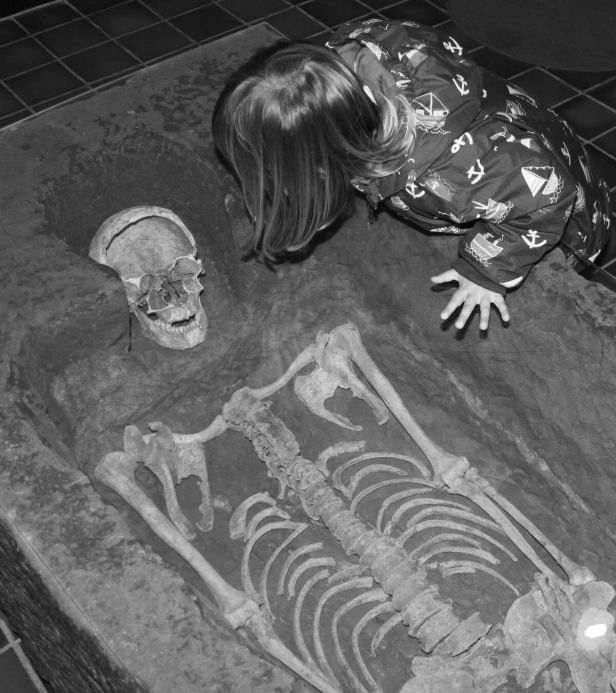 11 thoughts on “Archaeologists and the Dead – Got it Covered!”