I’ve so far composed 17 blog-posts about the BBC series The Last Kingdom, inspired by the Bernard Cornwell books. I’ve been sympathetic regarding some dimensions of the show’s portrayal of life and death in the late 9th century, and extremely critical of others. Strikingly, of significant relevance to my research interests, I have commented on the cremation of a Cornish queen Iseult, with King Alfred looking on, as a pagan way of death in the first season of the show. (Incidentally, the show Vikings shows the West Saxon Christians also burning their dead as a last resort during their exile in the fens).

In episode 2 of Season 3, Uhtred conducts his very own cremation ceremony for his dead wife Gisela: digging up her body from her ‘Christian’ grave and burning it, seemingly giving her with a ‘pagan’ death ritual.

The Last Kingdom and Vikings both portray a world of ethnic and religious oppositions and, like old-fashioned academic literature on the subject, cremation is often characterised as ‘pagan’ and ‘Norse’. Uhtred as a hero sits between and navigates these opposing worlds and his treatment of Gisela is part of a broader plot line where he moves in and out of favour with the Christian kingdom of Wessex.

Having said that, as mentioned above, Season 1 of TLK incorporates the potential of cremation being retained as a pagan ‘Celtic’ disposal practice in western Britain into the 9th century. A further pertinent dimension is how TLK has already visualised pagan graves as something different from, if proximal to, Christian burial grounds, and that pagans might anticipate interaction with graves, including necromancy.

The second-funeral of Gisela in Season 3 thus conjoins these themes: cremation is not passively pagan, but defiantly so in opposition to Christian burial. Meanwhile, cremation incorporates a mode of post-burial interaction with the cadaver.

There are further dimensions worthy of note. The cremation takes place in ‘secret’ at night, with Uhtred and the pagan Dane Sihtric digging up the body of Mildrid without an audience or rituals. Only the loyal Hild is the only other official witness of their behaviour. Inevitably, the cremation cliche of Hollywood is the focus of attention, with the burning of the body perceived as pivotal and no attention afforded to the subsequent investigation, translation and burial of ashes and their marking and memorialisation. Yet this secrecy does not hold and they are witnessed, the funeral serving to estrange Uhtred from Wessex. In this regard, cremation is shown as a counter-Christian statement in which bodies and burials are contested spaces.

Another dimension is the watery context: death is repeatedly shown in Vikings and The Last Kingdom as a riverside and lakeside occurrence. Being reflected in water is very much part of the burial and cremation aesthetic.

There is a gendered theme coming through too: Uhtred has now burned two women he has loved. Is cremation somehow ‘female’ as well as ‘pagan’ in the show’s imaginative portrayal of the late 9th century? 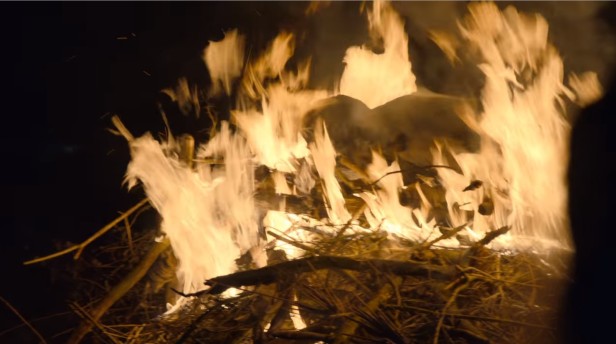 Archaeologically, the only significant evidence for Viking-period cremation practices come from the unique barrow cemetery at Heath Wood, Ingleby, Derbyshire, and dating to the late 9th and perhaps persisting into the early 10th century AD. So the TLK portrayal is ‘not wrong’, and does respect and relate to archaeological data, but not in a direct and precise way. The idea of digging up Christian graves and burning the dead is known from later medieval Estonia as a pagan act of resistance to aggressive missionary activity, so again, there are resonances with the medieval past in this representation.

One thought on “Burning is all! The Exhumation and Cremation of Gisela in The Last Kingdom Series 3” 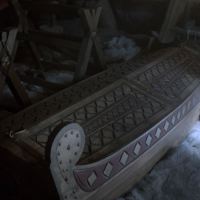