In search of Wat’s Dyke, I recently explored its northernmost surviving section in the Greenfield Valley, below Holywell, Flintshire. In doing so, I encountered a rich historic landscape, including not only Wat’s Dyke, and the adjacent holy well of St Winifride, but also Basingwerk Abbey: the ruins of 13th-16th-century Cistercian monastery. In addition, there are extensive ruins of the industrial activities that populated the valley in the late 18th, 19th and early 20th centuries: mills, and their associated ponds, leats and workers’ cottages, as well as chimneys and a clocktower. The museum was closed for the season. 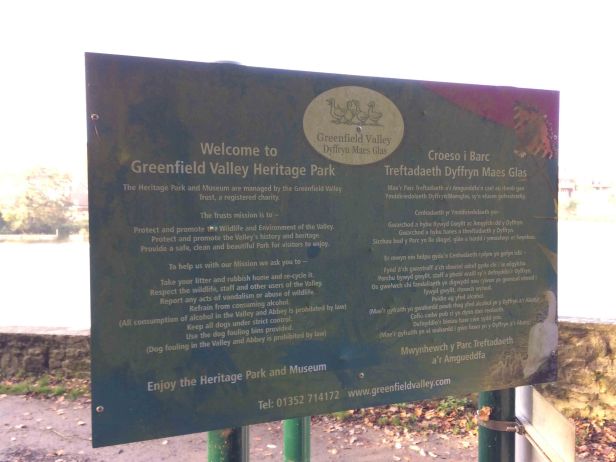 The monastic ruins are striking, if not as impressive as Valle Crucis. I’ve occasionally taken students here and it serves to complement VC in terms of both its origins (an English foundation rather than a Welsh one) and its landscape situation, drawing upon earlier ancient locales: the Pillar of Eliseg at VC, Wat’s Dyke and St Winifrede’s holy well in the case of Basingwerk (and possibly also the ‘fortification of the people of Basa’ which afforded its name to the monastery).  Furthermore, the post-monastic biography of the landscapes of Basingwerk and VC both have stories to tell of rurality, industry and antiquarian archaeology.

Complementing this, there are heritage displays for the ruins of a range of factories up the line of the valley and utilising its water power through ponds and leats, presumably adapting/reusing earlier monastic versions of the same thing.

The Abbey Wire Mill dates from 1780 and survived until 1894, making copper and berass rods wire. A soap works opened here in 1910, with St Winifrede represented on them. 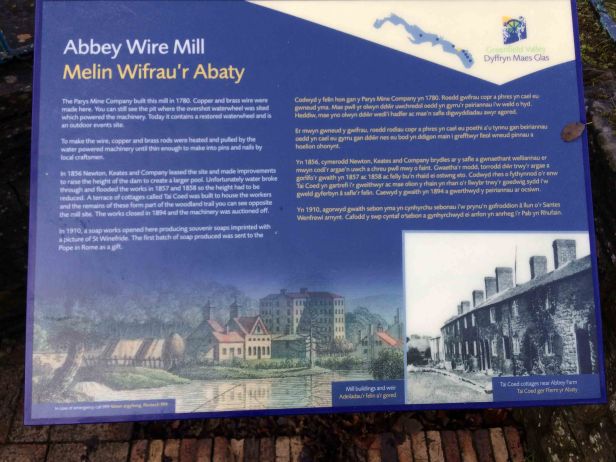 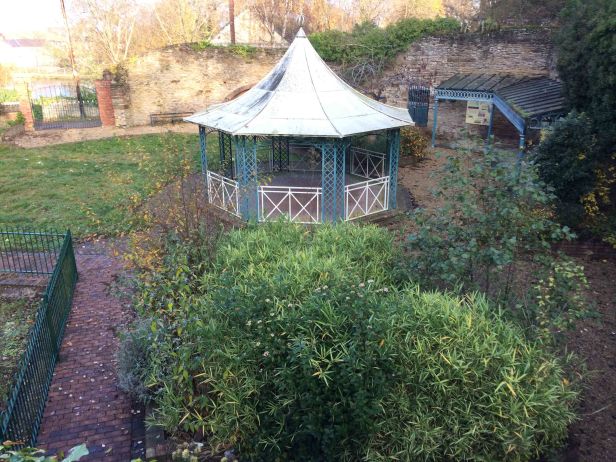 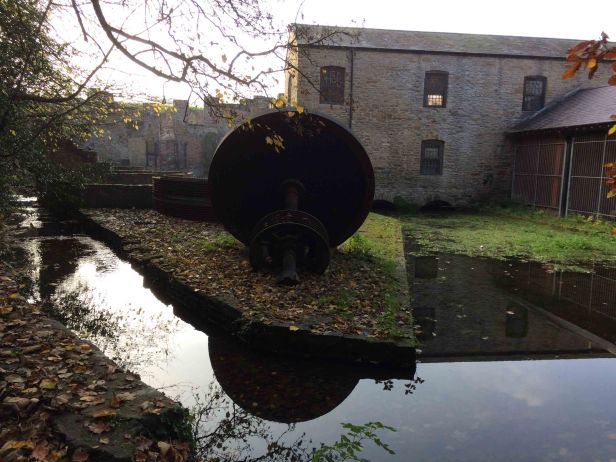 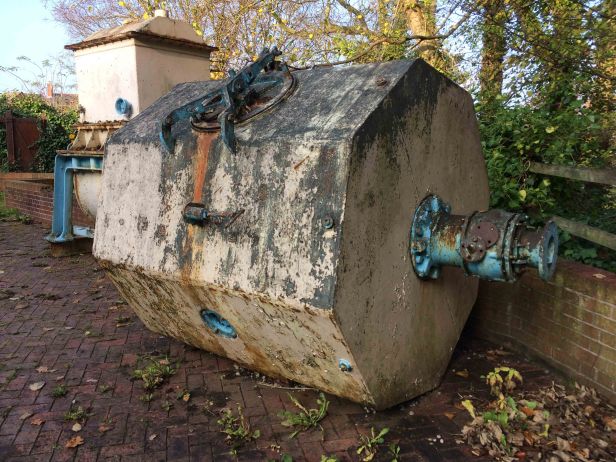 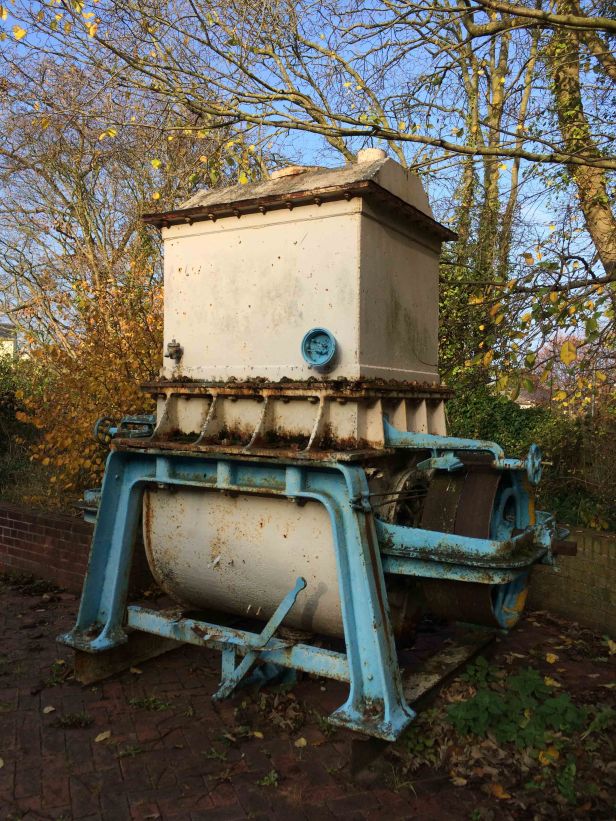 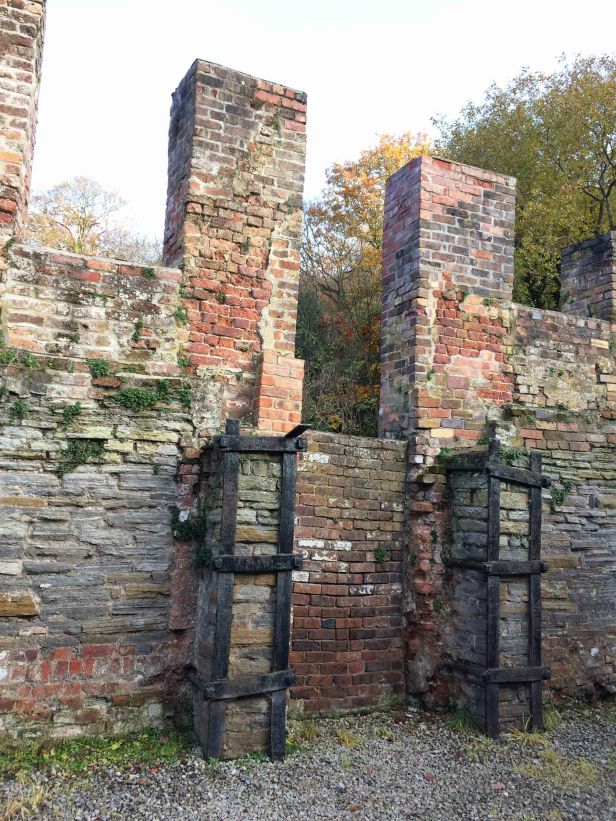 South and upstream from the Abbey Wire Mill, there are a series of ponds,

I also liked the heritage boards, but also the warning signs along the way, including the Lower Cotton Mill, built in 1785 and taken over by the 1850s as a flour mill. 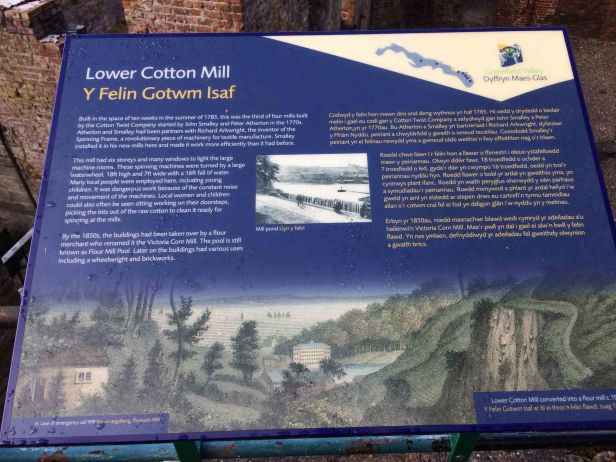 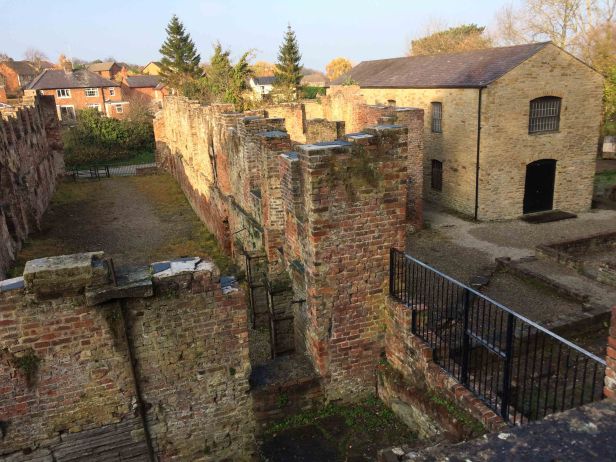 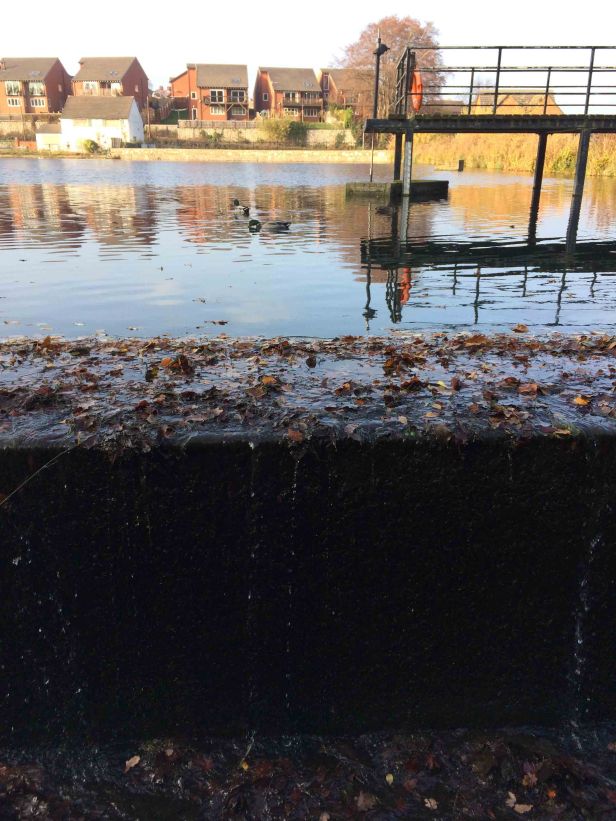 Upstream once again to the south is the Greenfield Mill, a copper works established in 1776. 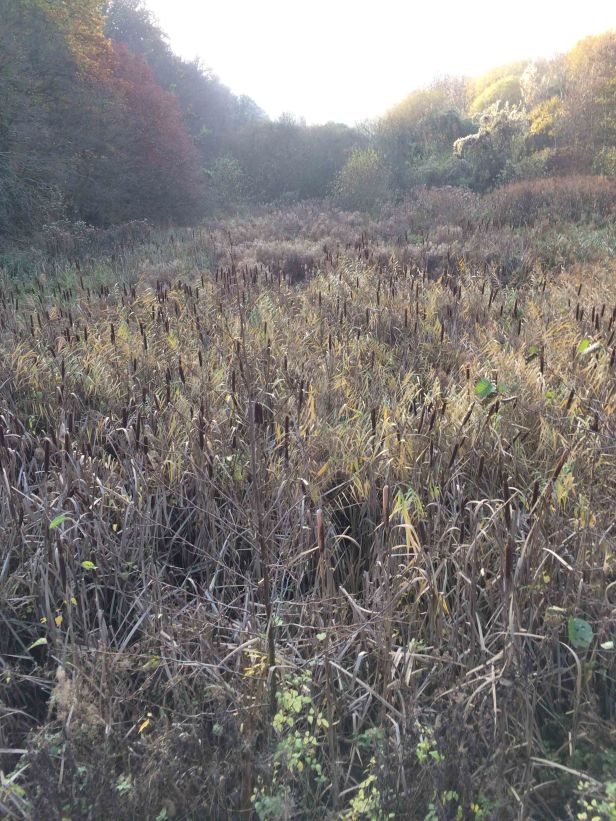 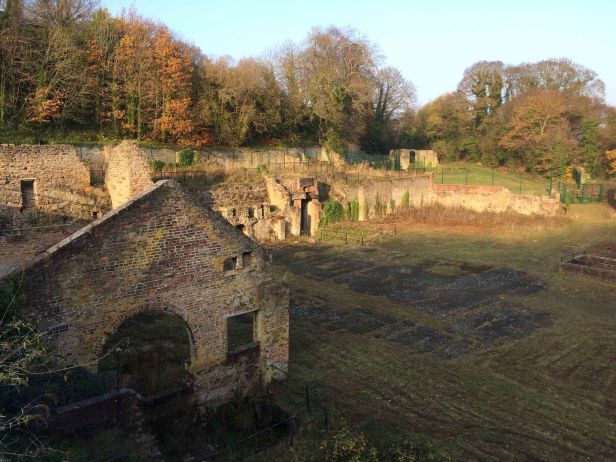 One of the most striking features of this part of the valley is the surviving clock tower to regulate local workers. 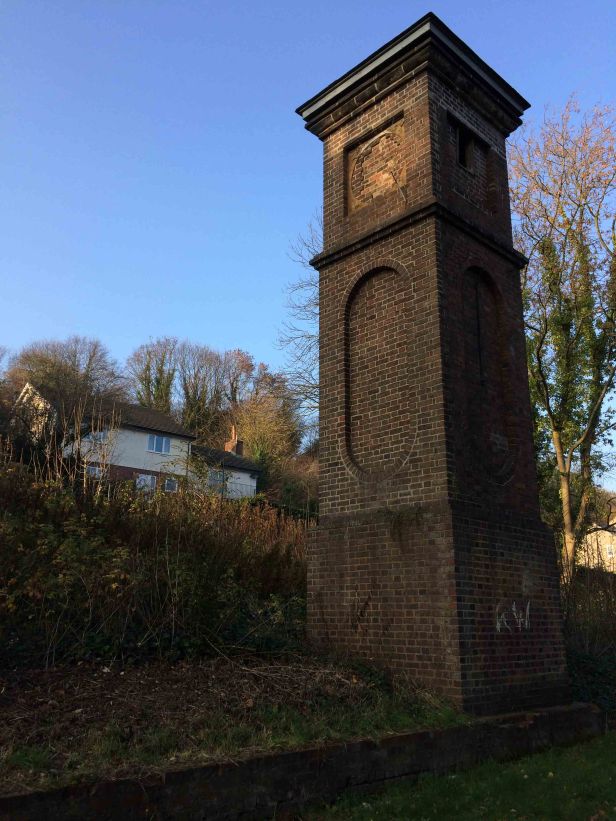 In terms of contemporary heritage and leisure material culture, I appreciated the signs warning of dangers. 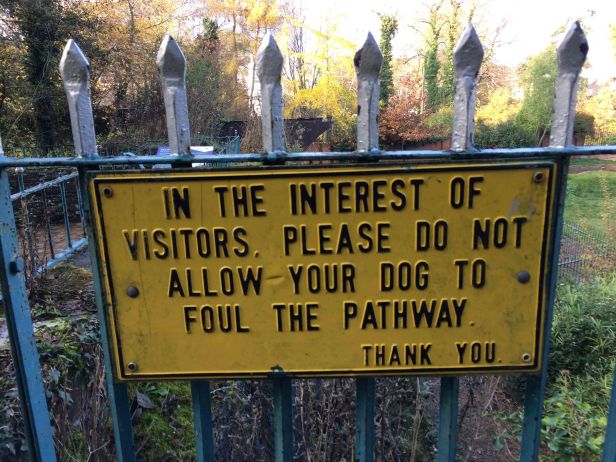 as well as the signposts guiding walkers.

What of specifically ‘archaeodeath’ dimensions to this landscape? Well, I encountered the ubiquitous memorial benches.

I also identified a ‘dead’ heritage board: a sad thing to witness, on display upside-down.

Early medieval heritage is alluded to via multiple materials. First, Wat’s Dyke does appear crudely on a heritage board, although its significance is not explained.

Second, St Winifride looms over the heritage site via the statue carved in wood (well, I presume it’s St Winifride, maybe it’s just a statue of a traditional flower-seller?

Meanwhile, given that Basingwerk is the starting point of the pilgrimage walk to Bardsey Island, a mural near the entrance to the abbey and the Greenfield Valley farm represents the 10th/11th-century cross at Maen Achwyfan: a stopping point on the route. So the early medieval past is incorporated into this medieval and post-medieval landscape through multiple heritage citations via text and image. 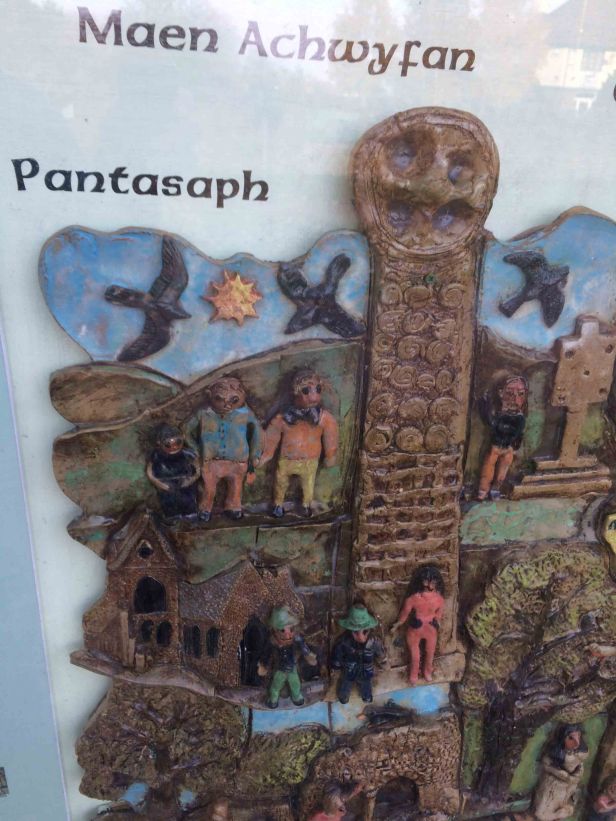 2 thoughts on “Monastic and Industrial Ruins: the Greenfield Valley”