Seasons 1 & 2 of the fabulous post-First World War gangster drama Peaky Blinders feature funerals, graves and gravestones at key points in the story. Filmed across northern England but notably with key locations utilised from Yorkshire, the cemetery scenes take place at the famous Undercliffe Cemetery, Bradford, West Yorkshire. This is part of a broader trend in UK filming of television series and films in Yorkshire. Yet the use of this particularly iconic Victorian funerary landscape deserves further comment and consideration as a relatively rare instance where early 20th-century inter-war urban cemeteries feature within an historical drama. 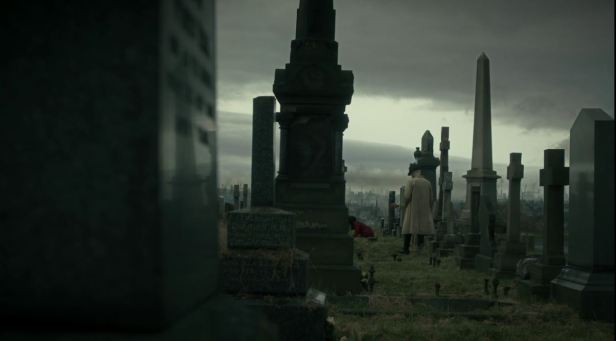 This and subsequent blog posts aim to briefly review the portrayal of 1910s and 1920s funerary behaviour and cemetery landscapes in the show. There are some spoilers and the identification of a few bloopers.

Freddy Thorne and Ada are in hiding, so where can they be found? Polly Shelby has a unique solution that reveals her canny nature as well as sheds light on the moral character of Freddy Thorne.

We see Freddy in the cemetery and he walks towards a grave. Nearby, Polly is kneeling, tending what we might either presume is her own relative’s grave (the identify of whom isn’t revealed) or simply a random memorial chosen so she can be close by when Freddy visits. It becomes clear that Freddy is visiting his mother’s grave on the anniversary of her death.

A heated exchange proceeds and Freddy storms off. Polly turns to the grave and speaks directly to Irene about the stubborn nature of her son.

The cemetery shown is one of the Victorian and Edwardian parts of the Undercliffe cemetery, with a reconstructed backdrop of the industrial city of Birmingham visible behind the cemetery.

The grave depicted is a very plain, simple, poor one, demonstrably out of place in its illustrious surroundings. Still, attempts are made to depict patina on the gravestone, if not moss. Supposedly only 4 years old, it is an exceptionally dreary memorial.

The grass is neatly cut  around the graves, but not particularly short. The close-up view of the grave shows long grass as might be expected before the days of mechanised cemetery strimming and mowing. The gravestones are all very well-kept and appear fresh as might be expected for the time: some would be under 50 years old at the time.

Yet the cemetery isn’t ‘new’. Some have evidence of formerly being over-run with vegetation. There is one cross that has lost its head.

The absence of iron railings might be a problem for historical accuracy, however. Traces of iron fittings are visible as stubs of former railings. However, it was my understanding this happened for the Second World War, not the First. So while this superficially looks Edwardian, it really is an early 21st-century cemetery…

Graveside behaviour is depicted as utterly simple: one of simple hat-removal and standing to look at the grave in isolation. Still, this isn’t depicted as ‘typical’: the individual visiting the graveside is a fugitive with no money or resources…

The grave is also displayed as a neutral one, outside of the divisions of class and status among the living. This is obviously a fantasy when late 19th and early 20th-century cemeteries were highly segregated according to social status and religious affiliation.

Moreover, we see the grave as a place of obligation and devotion, and one where a good son will never forget to visit and pay their respects no matter how humble the gravestone. We also get a clear sense for the spiritually inclined gypsy Polly, it is more than a grave, but a person…