I have just returned from a weekend attending the two-day interdisciplinary conference: Subterranean in the Medieval World, hosted by the Centre for Medieval Studies at the University of York and organised by Meg Boulton and Heidi Stoner.

There were 18 papers on different dimensions of the subterranean – imagined and encountered – in the medieval world from art historians, literary scholars, archaeologists and historians with papers extending from Italy to Iceland and Ireland but with a focus on the island of Britain.

Presentations explored themes from the fifth to the fifteenth centuries but with an early medieval focus, looking at spiritual and tangible relationships with the earth, its stones, surfaces and depths. Plenty of source material was employed, from crypts and catacombs to manuscripts, art and artefacts. Still, I was delighted to see varied uses of stone sculpture and burial evidence utilised extensively in many of the presentations.

On the Saturday evening, there was also a wonderful conference meal allowing plenty of opportunities to chat with the other delegates and speakers. Wine and whiskey was consumed.

I had the privilege of being asked to present the keynote address to the conference and I did so by starting off with some general concerns and issues I have with perceptions of material traces of the past in the Early Middle Ages, and the tenacious desire to tie all aspects of monument reuse into models of mass-migration and the replacement of earlier peoples, the process of Christian conversion, and ‘kingdom formation’ in the seventh century.

Whilst I acknowledged that these are far from irrelevant, we need to explore more contextually the many potential reasons and situations in which ancient monuments and old things were redeployed in ritual, social and economic life. With regards to the underworld, this involves thinking about monument reuse and engagements with below-ground in terms of many agents which facilitated discoveries from the past (from winds blowing over trees, to pigs digging into the ground, to agricultural work and exploring natural fissures and caves).

I then talked about digging graves and tombs as one particular strategy of engaging with the underworld, one that would have involved both digging and depositing, but also closing off and imagining, rediscovering and encountering the dead. I also flagged up the possibility that some architectures were designed to imply the presence of the dead beneath their surfaces. I have been writing about hogback stones in this regard.

I also abused my privilege to defend myself against the accusation of illogically employing the term ‘ancestors’ in my previous research on monument reuse…  I couldn’t resist showing that in my previous writings, while I conceded that the term is problematic, I hadn’t claimed that barrows and earthworks reused as burial sites were exclusively and widely perceived as ancestral as such, but that their reuse facilitated the construction of ancestral connections; this is not the same thing.

The Pillar of Eliseg and the Creation of Ancestors

This is suggested by my own collaborative research at the Pillar of Eliseg, and already discussed in print by myself and by Professor Nancy Edwards. As part of the opening of my talk, I suggested that, for the Pillar of Eliseg where we excavated secondary Bronze Age cremation burials in cists, the choice to put a prominent ninth-century cross upon this site was a strategy of drawing upon imagined lengthy and distant pasts. This was a past in which imagined ancestors and heroes (whether imagined as ancestors or not) were a key potential component of the commemorative strategy.

The empirical basis for this argument is not only the Latin text that refers to these ancestors and/or heroes, it was the materiality of the mound itself. Here, I argued that monument reuse is material practice, a physical engagement with place, not simply a rewriting or overwriting. The shallow multiple secondary graves of earlier date and contrasting form to those of ninth-century times (when west-east inhumation burial was commonplace) would have been readily encountered in the Early Middle Ages in the mound beneath the site chosen for the Pillar.

Whether this argument works for all times and all places in the early medieval period, and whether all ancient burial monuments were regarded as funerary and ancestral, is of course a problematic issue. And it was to this issue, of how ancient monuments were perceived in the later Anglo-Saxon, Christian world of hierarchical social structures and increasingly powerful kingdoms, that the rest of my paper aimed to address.

In a future post I will review my keynote lecture, focusing on the Archaeology of Weland the Smith.

One thought on “Going Underground – Subterranean at York Part 1” 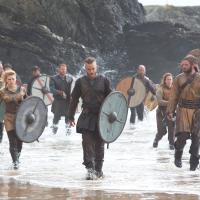