The surviving stretches of Offa’s Dyke (an early medieval linear earthwork likely built by the Mercian kings as both a military and ideological device of landscape control and dominance) within the National Trust property of Chirk Castle have been a focus of exciting new archaeological work by Clwyd-Powys Archaeological Trust. While the hot dry summer of 2018 saw a section of Offa’s Dyke resurface from where it was flooded in the 18th century for an ornamental lake, Ian Grant of CPAT led the first of second seasons of excavations close by. Here’s my blog-post for the 2018 season, soon after which Dr Paul Belford led us to visit the excavations from the Oswestry Offa’s Dyke conference on 15 September 2018. I revisited the CPAT dig in 2019 where I encountered my University of Chester students volunteering and busy digging. The bank of the monument survived despite being ‘landscaped’ away, and the ditch was of phenomenal depth and striking form. You can read more about their findings in the interim publication by Dr Paul Belford in volume 1 of the Offa’s Dyke Journal.

Of course, I’m writing this soon after a new campaign has been launched to raise money to protect Offa’s Dyke given its ongoing destruction in multiple locations, not least to the north of Chirk. My point: investigating Offa’s Dyke matters for those interested in early medieval history and archaeology, but also for people today and future generations: both local people and visitors! The monument’s survival relies on people understanding and respecting it! It is therefore exciting times for new research on Offa’s Dyke at Chirk and its environs, facilitated and supported in part by the Offa’s Dyke Collaboratory and the Offa’s Dyke Association not only to enhance our academic understanding of Offa’s Dyke but also enhance public awareness and knowledge of the monument.

Enhancing public knowledge and understanding of Offa’s Dyke hasn’t been as easy as you might think. Such a large monument is cursed by its scale: it often hides in plain sight! This is why I want to discuss the changes in the heritage interpretation of Offa’s Dyke to visitors to Chirk Castle.

As recent as 2016, I had noted the near-complete absence of any signalling or explanation to visitors that Britain’s greatest ancient monument doesn’t simply pass through the Chirk estate, all visitors drive or walk over it at least 4 times – perhaps up to 6 times – in a standard visit (not including the opportunity to walk along Offa’s Dyke as it drops down into the Ceiriog valley)!

Not only that, they might buy a tea or coffee and have a picnic on the denuded rampart of Offa’s Dyke at Home Farm, and let their kids play in an adventure play ground on it. All this might happen without the opportunity for these thousands of visitors each year to even realise it is there given the lack of signage and heritage interpretation. This isn’t about simply about ignoring Offa’s Dyke, but a broader lack of engagement with the pre-castle landscape of the Chirk estate. Hence, deploying a tad of rhetoric, I accused the National Trust of ‘Dyke Denial’.

The following year, 2017, I celebrated the fact that a new way marker at a key location between the car park and stable block and the castle was installed which indicated seasonal access to a long-established footpath along Offa’s Dyke. Offa’s Dyke has also been included on estate walking maps by this date. Well done National Trust: important first steps!

Returning twice after lockdown, I was delighted to see that Chirk Castle now has further attempts to mark and explain Offa’s Dyke. So in 2021, 5 years after my initial blog-post, let’s review what they have done.

I confess I’m uncertain whether in 2016 or 2017 they had Offa’s Dyke on the National Trust website: I certainly cannot recall seeing anything. Still, first up, let’s celebrate the fact that there is now a digital presence for Offa’s Dyke in the section about the estate. I’m not happy with the equation of Offa’s Dyke with a ‘border’ and the border being exclusively with the kingdom of Powys (see below). This is an idea that is pervasive because it was repeatedly promoted by Dr David Hill. It persists despite being critiqued and countered by multiple authors in recent years, including Ray and Bapty (2016) in their Offa’s Dyke: Landscape and Hegemony in Eighth-Century Britain. Still, this is at least putting the dyke ‘on the (digital) map’ for National Trust visitors:

Bisecting the estate is a section of the remarkable 8th century defensive earthwork Offa’s Dyke, built by King Offa of Mercia to mark the ancient border with the kingdom of Powys. When you drive into the car park at Chirk you will cross Offa’s Dyke, although you may not notice – William Emes levelled vast sections of it as part of his uncompromising work on the parkland. A fantastic section of the dyke still exists in the medieval deer park, which is accessible from March to September along a permissive path.

What is perhaps most frustrating about this digital presence is there is no images or annotated map to help the visitor know what to look for on their walk, and where!

The second development is that the denuded bank of Offa’s Dyke over which visitors all walk at Home Farm from the entrance to the castle is now marked by a beautifully carved bench, aligned so as to mark (roughly) the centre of the bank, and with a compass in the form of an 10-spoked wheel indicating the N-S stance of the earthwork. A carved line running each side of the compass evoking the line of Offa’s Dyke, with the curves to the south illustrating how Offa’s Dyke jumps over to Craignant, around Selattyn Hill and then on southwards. Meanwhile to the north the kink created by the navigation of the River Dee, and the angle-turn of the Dyke at the crossing of the Afon Eitha are represented. This is all carefully considered and evocative even if such details will be lost on most folks.

The bilingual text on the compass denotes Offa’s Dyke as an ethno-linguistic divide, with ‘Clawdd Offa’ and ‘Offa’s Dyke’ to west and east respectfully. This role as ethno-linguistic border is further emphasised by the larger archaic quasi-medieval texts inscribed on the bench – Wales and Mercia to the west and east respectively on the north side of the bench, Cymru and Mersia on the west and east sides respectively on the south side. Interestingly a westward gaze, mimicking that of the monument, is given primacy for these larger texts – one reads them from within ‘Mercia’ looking west over the bench.

I have two critical points.

An interpretation panel by the Kitchen Garden

Where the path crosses the denuded but still-prominent line of Offa’s Dyke to the kitchen garden, there is a new metal colour bilingual heritage interpretation panel set on a wooden post. This is one of a series of new panels explaining the buildings and monuments in the vicinity of Home Farm and it signposts Offa’s Dyke explicitly for the first time. The aerial photograph of Offa’s Dyke, picked out by snow, shows Home Farm, Chirk Castle, and the Ceiriog valley beyond where the monument can be seen rising up from Bronygarth and on southwards. This is a great, carefully selected image to show a perspective the viewer cannot from ground-level. This is brilliant, assisted by the fact that the photograph is taken from the same angle as the perspective of the viewer of the interpretation panel. This is well thought-out.

However, the short text contains three fundamental inter-related issues that must be mentioned. It begins:

Offa’s Dyke is a large linear earthwork running 176 miles along the border between England and Wales, from Prestatyn in the north to Sedbury in the south.

This is inaccurate because it explicitly confuses the early medieval Offa’s Dyke monument, which survives for around half that distance, and the line of the Offa’s Dyke Path, established 50 years ago and running all the way from Prestatyn to Sedbury. It also implies an association with the border of England and Wales which, while suitably vague to escape being ‘wrong’, is misleading. After all, there are only a few short sections of Offa’s Dyke where the monument is coterminous with the modern Welsh/English borderline.

However, the confusion of the monument as a ‘border’ is made explicit in the following paragraph, reflecting the text on the National Trust website discussed above:

It is named after King Offa, the 8th-century ruler of the Kingdom of Mercia, and marked the border between his kingdom and the Welsh kingdom of Powys.

Not only is this perpetuating the equation with historic border and modern, but it presumes the only polity that Offa’s Dyke confronted was Powys, something which Ray and Bapty (2016) have cast serious doubts over and certainly makes little or no sense in explaining the sections of Offa’s Dyke in Gloucestershire and Herefordshire.

So in equating Offa’s Dyke with a border, confusing the Dyke and the National Trail, and claiming it was built only as a border with Powys, this sign, while welcome, is misleading for visitors.

We must celebrate the investment of time and resources by the National Trust for planning and placing heritage interpretation for Offa’s Dyke both digitally and in the landscape. However, there are issues.

The digital presence lacks a geographical anchor: where can visitors see Offa’s Dyke? The website won’t help you there.

While beautiful, I feel the scale and association of the Dyke with an ethno-linguistic and (thus) national border materialised via the bench is misleading.

I welcome the interpretation panel and its aerial photograph to help visitors understand the scale, character and location of Offa’s Dyke in the landscape, but I do feel they might have been saved some embarrassment had the National Trust consulted the Offa’s Dyke Collaboratory on the text before installation. The equation with border with a single early medieval Welsh kingdom (as on the website), and the confusion of the Dyke with the Offa’s Dyke Path National Trail are unfortunate and could have been easily rectified.

At the end of the day, however, the monument is still there to be visited and well-protected by the National Trust in the parkland beside the car park, at Home Farm, and descending into the Ceiriog valley. There remains so much untapped potential for enhancing engagement and understanding for Offa’s Dyke for visitors and locals alike. 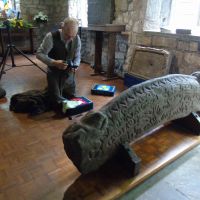