My fifth and final post about Season 9 of the television series of The Walking Dead overlaps with my review of The Walking Dead comic books Compendium 3 (because the latter has very little for comments compared with the first and second compendia). They each culminate at nearly the same point in the story lines and they both share in a stark punishment meted out by The Whisperers.

Having infiltrated the market, Alpha captures and decapitates a wide range of individuals from across the communities of the Coalition: Alexandria, Hillside and The Kingdom. These include ‘lead characters’ from each community. This action is utterly shocking and evil and carefully calculated action intended to instill fear and dread in all the survivors (note: those killed differ between the comic books and the TV series). It is not simply the act of decapitation that is terrifying, nor just the display of the heads. It is the striking positioning of the heads on stakes on a prominent hilltop that marks this out as a particularly horrific and memorable.

This independent action of revenge by Alpha for the taking of her daughter is aimed to assert her own position within the Whisperers and offers a stark retribution to those Whisperers killed in the opening conflicts with the other communities. The killings and the display are therefore statements for both those inside and outside The Whisperers.

The decapitation and display of the heads also serves as a warning and claim over territory. The aim is articulated in a message sent by Alpha: the heads serving as a permanent marker between the land of the Whisperers and those of the other communities. This territorial divide is never fully explained in landscape terms, but long after the heads were removed, the markers survive to define the territory, and this is made especially clear in the television show when the group are forced to abandon The Kingdom and breach the Whisperers’ territory in a snowstorm to reach Alexandria.

This definition of territory is portrayed as animalistic, linked to the itinerant, roving character of The Whisperers – like a pack of wolves. The exact extent of their movements and their uses of natural resources is left unclear.

Yet, there is far more emotive power as well as retributive and territorial efficacy in this action in The Walking Dead than in The Last Kingdom. The individuals killed are loved personalities for both those left behind and for the audiences of the books and TV show. The slain, and their undead heads, are still moving but unquestionably dead on spikes. It is truly a horrific moment, enhanced by the dread of those who have read the comic books and would be fearful of whom would appear on the line of stakes, including the potential for characters to appear who are not in the books.

I will move forward to review other aspects of the comic book compendia 3 and 4 in due course, and I look forward to watching Season 10 of the television show. I have tended to focus on funerals and memorial practices, but this stark killing and the display of the dead fits into a pattern of the maltreatment of both the living and the undead characterise those who have lost the plot, and are the ‘bad guys’ for failing to share in the shared ambitions of the ‘good guys’ to rebuild society following the zombie apocalypse.

The overt disregard for both the living and the dead articulates the inhumanity of The Whisperers who have turned their back on wishing to be part of a human, civil, society and instead organise themselves akin to pack animals in the wilderness. Of course, in contrast, in the Early Middle Ages, such acts of displaying criminals’ heads would have marked out socially, politically, judicially and territorially the very structures of Christian, civil, society. 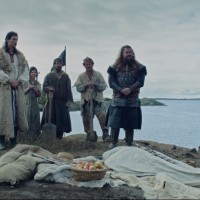 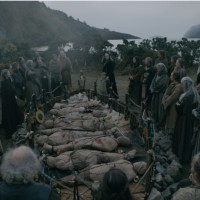