A friendly and receptive audience welcomed me yesterday evening to my first-ever medievalism seminar, organised by the fabulous Dr Simon Trafford of the Institute of Historical Research, University of London. There was tea, wine, debate and conversation around my image-rich presentation surveying the pagan Norse funerals which are integral to the plot of the 6-series hit History Channel show Vikings. 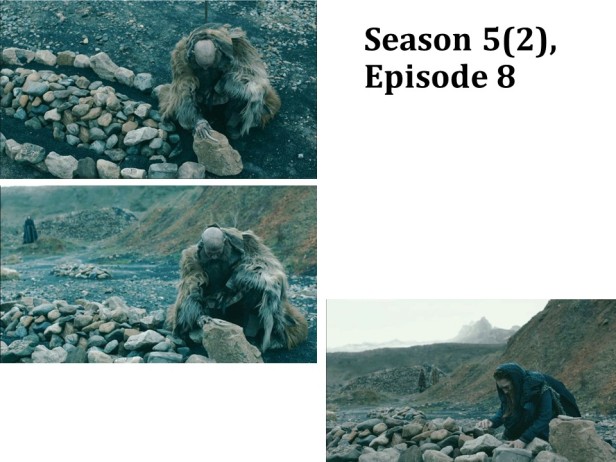 My talk thus explored my latest thinking on the way Vikings portrays death and the dead, building on 43 blog-posts (it says 42 on the slide, but I blogged about Vikings yesterday too) and a series of publications.

As well as addressing what I think the show ‘gets right’ and what it ‘gets wrong’, I considered why this widely viewed show might be a form of public archaeology, engaging mass audiences with archaeological evidence. As such, I considered how it was relevant to broader discussions of the intersection between mortuary archaeology and contemporary society.

Inspired by later medieval sagas and Viking Age historical sources, but underpinned and enriched by archaeological evidence and themes, the History channel’s Vikings (2013–) is a unique drama series exploring the late eighth/early ninth century conflicts and culture of the Northmen, aimed at a global television audience. This presentations introduces the series and its varied portrayals of mortuary practice. From the portrayal of the deaths of chieftains and those slain in battle to family members and children, I identify key archaeological themes behind the depiction of death. This prompts discussion of mortuary archaeology’s influence on popular perceptions of the Early Middle Ages, the programme operating as education, entertainment but also reflecting on present-day anxieties over the nature of human mortality.

When I got back to Chester late-night, I learned my presentation, which included a brief discussion of the influence of Einar’s funeral from the 1958 film The Vikings, coincided with the announcement of the death of actor Kirk Douglas, who had played Einar!

2 thoughts on “The Archaeology of Death in ‘Vikings’”