I admit, my first thought when I saw the fire ritual scene from episode 4 of Vikings Season 5 part 2 was: “yep, Michael Hirst has finally lost whatever plot he’d begun with in Season 1.” On reflection, however, perhaps this is the moment where Vikings really gets into its stride in its portrayal of death and fire in a semi-legendary 9th-century Scandinavia. Let me entertain this second reaction here.

After five seasons of watching a telling of the early Viking Age in which leaders exploit and abuse pre-existing social hierarchies and political authorities through murder and raiding to suit their own machiavellian ends, from Earl Haraldson, Jarl Borg and King Horik to King Ragnar, Earl Ingstad (Lagertha) and Duke Rollo, the arrogance and delusions of the sons of Ragnar take crazed power trips to a new level with the self-appointed divine kingship of Ivar. Now, I’ve already discussed how the show portrays death rituals as means of consolidating power and authority during crises of succession. In each case these extravagant funerals are those involving firing ships: Earl Haraldson and Queen Aslaug. We see this repeated in a new fashion in Season 5 part 2. 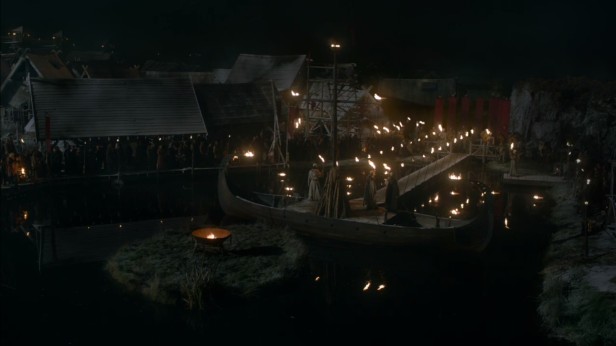 For context, we can note that the show has repeatedly playing with the link between power, deception and death ritual, exemplified in the funeral of Ragnar in Season 3 as discussed here and here. Furthermore, Ivar inherits this capacity in his use of mock-cremations to deceive his enemies at York in Season 5 part 1. 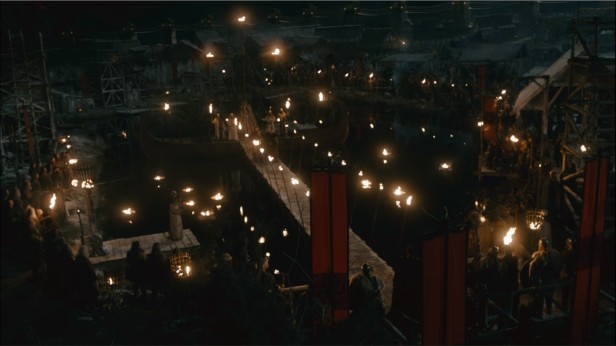 Yet in episode 4, once Ivar has gained power in Kattegat, we are shown his use of fire rituals as deception once again. We are shown a nighttime torch-lit procession of masked warriors, masked dancers and priests. Ivar and his bride arrive too in his Floki-built chariot in full crazy raven-crown and face-paint articulating his claims to Odinic descent. 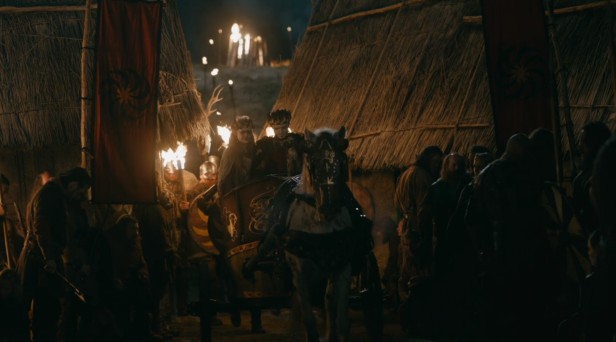 They pass a sacrificial apparatus made of spears, chains and troughs, with skulls of animals and people suspended from it (as appearing at the blood-eagling of Jarl Borg in Season 2). 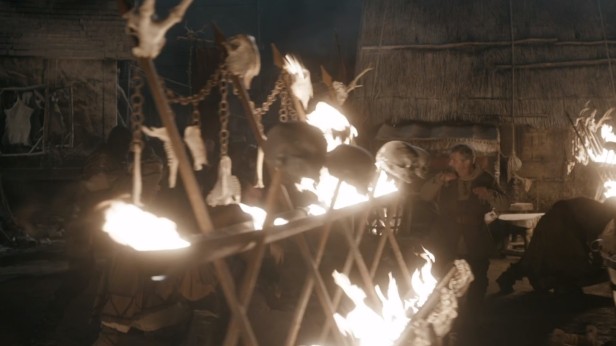 The focus of the ceremony is a stand-in Lagertha, bound upside down over a pyre on the ship at the end of the jetty beside the island. The idea of the elaborate stage-setting, with what seems like an island upon which the ship is moored, the ship seemingly adapted especially for the sacrifice with its prows turning inward to bear burning bowls, and the use of the mast for the suspension of the fake-Lagertha and the piling of wood for her conflagration, is all bizarre and disturbing. I think the point is that Ivar has just put too much effort into stage-managing and feigning the death of his enemy. After Ivar proclaims her identity and guilt, she is set alight and the crowd on the shoreline on three sides watch her burn. 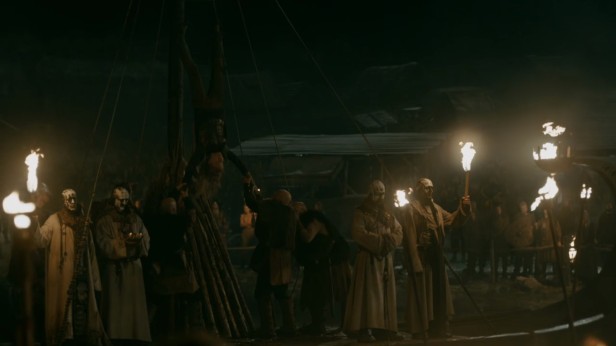 In this fashion, Ivar attempts to publicly exorcise Lagertha’s charismatic hold on the populous through fire rituals. The victim herself and dissenting shield-maidens try to disrupt the ceremony, but to no avail. This is all very silly, and I think the viewer, introduced through 5 seasons of Norse funerals, is supposed to respond to it as such. Set against the flamboyant and theatrical funerals of Haraldson and Aslaug, this is still over-the-top. 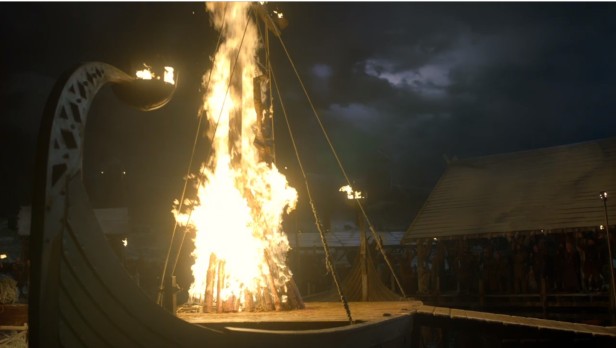 This scene initially confused me as I struggled to consider what possible archaeological or historical precedent might have inspired this scene and why they went so ridiculously off-piste with this scene. Then I realised I was probably thinking about this the wrong way. I don’t think there is a precedent (although happy to be corrected). Instead, I think the scene is perhaps intended to float free of the Viking Age for us watching. It is supposed to be ludicrous yet disturbing. I think the show might be here deliberately stepping out of the Viking Age in its clearest fashion yet by showing the connections between fire, power and sacrifice in the context of the petty tyranny of Ivar. This is because I cannot escape noticing the eerily resonances with our 21st-century present in the fire rituals. The components of Ivar’s mock sacrifice of Lagertha are like some traumatising mash-up of the tiki torch Unite the Right rally in Charlottesville in August 2017 and Trump’s never-ending ‘lock-her-up’ chanting rallies from the 2016 US presidential election campaign with a powerful female leader as the focus of rage and hate. 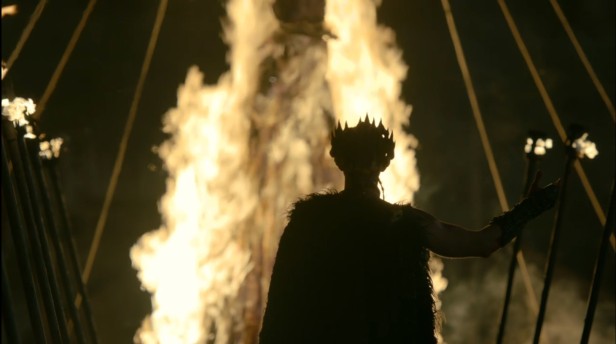 In summary, at a time of demagogues acquiring and sustaining power through deception on both sides of the Atlantic, we can see something disturbing about ourselves in Ivar’s ridiculous and delusional deified power trip in Vikings Season 5 part 2, and those willing to kow-tow to his madness. Of course, we could instead just see a power-crazed fictional character doing crazy stuff in a Viking world as part of a silly but popular TV show… I’ll let you reflect.

5 thoughts on “Death, Power and Fire in Vikings Season 5 Part 2” 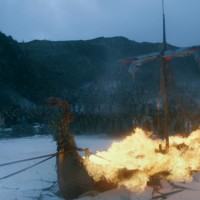