The popular TV show Vikings has continued into the second half of its 5th season. The first half of Season 5 was framed around Norse pagan funerals in England and Iceland. In this second series of 10 episodes, there are plenty more violent deaths and some interesting/noteworthy/odd depictions of Christian funerals and burial grounds. For the Norsemen themselves, there are only a few additional mortuary representations of note, once again inspired directly by the Icelandic sagas and various archaeological findings. Oh yes, and there’s also a batshit crazy human sacrifice. Anyhow, first, let’s discuss megaliths.

The embodiment of an ancient land in The Last Kingdom is a series of megaliths as setting for boundaries, meetings and gatherings of different scales, and to evoke the ‘paganism’ of the Danes. These are notably in Seasons 1 and 2 (see posts here and here). In that discussion of TLK I already noted that an ancient standing stone in the English landscape had been  deployed in Vikings Season 2 to evoke a similar sense of a pre-Christian past in the landscape traversed by the Christian Anglo-Saxons and the pagan Norse.  Floki, as a diehard pagan, is seemingly the one to recognise it as a sign of a pagan past. This is juxtaposed against the awareness of a Roman past enjoyed by the West Saxons. 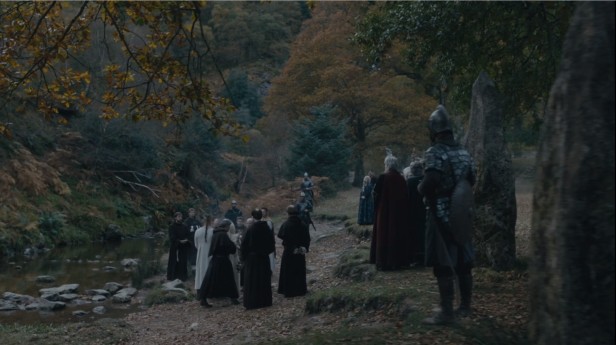 Vikings Season 5 part 2 returns to this theme, albeit briefly, affording a river-side set of megaliths as a background to two scenes. The scenes are not arbitrary, I would argue. First we see a secret meeting and snog between Lagertha and Heahmund in episode 2 (12), and subsequently the baptism of Torvi and Ubba in episode 3(13) by Heahmund. In terms of the narrative of Vikings, the stones serve as a background to interactions between different peoples, in private and in public, but also to specific interactions between the ‘old’ and ‘new’ religion: an elicit love affair between a pagan warrior woman and a bishop, and then the baptism of two leaders of the pagan Norse. In filmic and televisual terms, megaliths are touchstones to the past and embodiments of the passage of time from pagan to Christian.

Were stone circles actually used as meeting places in the Early Middle Ages? Perhaps some were, and the Rollright Stones might just be one such instance. What is clear is that these popular shows take forward an idea well established in the antiquarian imagination and romantic literature of the late 18th and 19th centuries for new generations of viewers seeking a window into the early medieval world.

One thought on “Megaliths in Vikings Season 5 part 2” 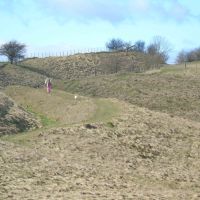