Do you notice ash-scattering in the landscape?

I’ve addressed the archaeology of contemporary cremation in explorations of churchyards such as Pennant Melangell, and West Kirby,  but also cemeteries such as Blacon and crematoria such as Pentrebychan, Wrexham, I’ve used this blog to talk a lot about memorials in landscape contexts, including roadsides, parks and country parks. Sometimes these memorials are associated with visible traces of ash-deposition and ash-scattering  as with Len’s bench at Ty Mawr Country Park, in other cases it remains unclear whether some, or all, of the ashes were consigned in the memorial’s vicinity, or were instead/additionally placed elsewhere (including churchyards, cemeteries and gardens of remembrance, kept at the family home, interred in a domestic garden etc.). In these cases, I’ve emphasised the place-making qualities of memorials – the significance of the natural and historical qualities of the place and the vistas it affords. Whether spiritually or mnemonically, the dead come to be diffused and subsumed into these locales. Sometimes it’s clear from the memorial that the precise spot is significant for the view it affords, or the repose it offers, where the living and the dead can commune in a private way in a public place, sharing in the place and its aesthetic and mnemonic qualities.

Ash-scattering without memorials is more mute. The two-stage process of cremating the dead today – burning and grinding – does not prevent ashes being readily discerned when scattered in the British landscape, but it makes it difficult to readily discern whether we are dealing with human and/or animal remain, and how many of each. I’ve discussed examples at Castell Dinas Brân, Llangollen here and here.

Castell Dinas Brân is situated in a component of town and country. It is a landscape of farming, a canal, a river, walking, cycling and climbing. Yet it is also in a landscape of ash-scattering.

I also discussed the precise location of the ashes as very carefully chosen and thus significant for the bereaved and the ceremonies they conducted there, whether alone, or as a group of people.

The place chosen for ash-scattering was therefore not random; it was at a point just below the ruins and where views over both the town and Vale were possible.

I then returned and reflected on further ash-scattering at the same spot, adding further points about what one can discern from the placing of the ashes regarding the kinds of practices that took place:

…these are not randomly situated, but located with clear views out over the landscape of the Vale, the hills surrounding it, and the town below. One can imagine the situation, perhaps partly depending on wind-direction, of mourners standing on the very edge of the ruins and strewing the ashes on the slopes away from main routes of human foot traffic: private corners of a public spaces, looking out, looking down.

I then presented the evidence of two further locations in Wrexham borough I know about – one at the base of a tree used for memorial ribbons, and another by the edge of a 19th-century quarry with spectacular views: both are in a country park.

I suspect in most cases the scattering is done illegally, although permissions might have been sought and granted.

So I’ve discussed the scattering of ashes of humans and animals in the landscape on this blog before in terms of the precise micro-environments selected and the broader vistas these locations afforded but I’d like to pick up this theme particularly in relation to the Great Orme and introducing this practice to kids. Walking around the headling, I intro them to various aspects of the natural and historic landscape, but also when they ask and when I observe, we also discuss the evidence of ash-scattering.

So if people wish to strew litter rubbish across this landscape, I discuss with kids the nature of this behaviour and why it is bad. I discuss dog-crap too: why people let their dogs foul public spaces and how it isn’t the dog’s fault but irresponsible dog-owners. When people place memorials, I discuss why they did it and what it says about the dead, the living and us as audiences. And when I see ashes, I discuss the process of modern cremation and the various choices people make about what to do with the cremated remains of their loved ones. I also discuss cremation in the human past too, one of my specialisms. 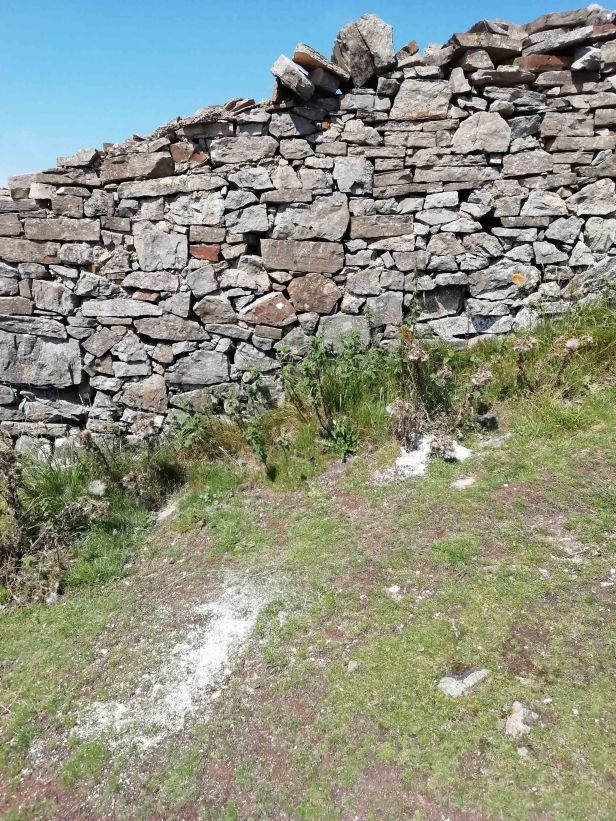 These locations are both interesting – with the backdrop of a drystone wall that serves both as a windbreak and to afford some privacy from the principal summit visitor centre. The wall is itself a prominent landscape feature, circumventing the Great Orme. So in these regards, the association with a boundary is far from arbitrary.

Both areas are on steeply sloping ground, with the wall upslope. Hence, a further dimension is the ability to stand and strew downslope. In short, there is a vertical landscape interplay at work in these ceremonies, as noted for other situations – people stand, and cast their loved one’s remains downslope.

The locations chosen for ash-scattering both also afford stupendous vistas out over the Irish Sea and, significantly, back over the North Wales coast. In such a location, rather than on the north or east side of the Great Orme where one is orientated mainly seaward, here one can disperse the ashes of a dead family member or friend in a place that is publicly accessible, memorable, but also private, yet defines links to not only the Great Orme but to Wales more broadly. These ashes are scattered at places with specific relationships with land, sea and sky. I think this combination of factors might explain the precise situations chosen in each instance.

2 thoughts on “Ashes on the Great Orme”