This summer was my third year attending the Heysham Viking Festival. In 2017, I was invited to give an evening lecture, speaking alongside Dr Fiona Edmonds, at St Peter’s church focusing on the interpretation of the Heysham hogback stone. In 2018, with Brian Costello, I ran a Department of History and Archaeology, University of Chester stall where we promoted our courses and also discussed information about Viking archaeology. I also led guided tours of St Patrick’s chapel, its sculpture and its rock-cut graves, and conducting ‘Viking funerals’ with Adam Parsons within the living history encampment.

This year, I was back for a third year to observe goings on, attending the evening lectures, buy cheese, mead and fudge, interview re-enactors Adam Parsons and Stuart Strong for a forthcoming book project, as well as to attempt educational creative Viking funerals once again. I also got to witness the results of a vaguely Viking-inspired piece of public sculpture installed at Half Moon Bay called ‘Ship’.

In this post, I don’t want to repeat a commentary on those elements already covered before, but I do want to reflect on a few additional aspects to the Festival and elements distinctive for this year.

For the third year in a row, the St Peter’s church hosted a pair of evening public lectures. These were, once again, packed with members of the public including some of the re-enactors attending the festival. Both were well-executed popular talks, drawing on fresh research.

Dr Roderick Dale presented on the Old Norse literature’s representations of berserkers, drawing on the results of his doctoral research on this subject. He argued that our interpretation of berserkers very much has reflected our reoccupations and fantasies about the Viking Age. His take is that berserkers were ‘king’s champions’ rather than shape-shifters or naked battle-crazed daredevils. 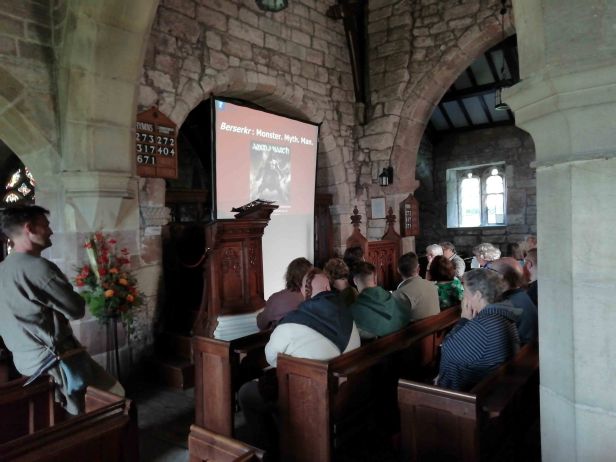 Dr Luke Murphy outlined the complexity and variability of Old Norse paganism, and how fragmentary, and (sometimes) contradictory, our knowledge of it actually is. He pursued a useful division between public and private religious practice, and identified avenues from archaeological evidence, place-names and written sources that together give a flavour for the latter.

Watching and talking to the Re-enactors

In addition to my long interviews with Adam and Stuart, I spent more time this year observing the re-enactors camp and the battles on the main field. I got to meet some new people and talk with the fabulous Gary Waidson. Two points of note emerged from my chat with Gary and seeing his display. 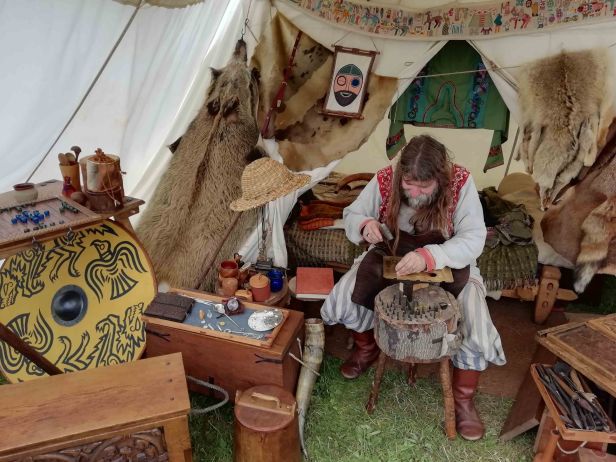 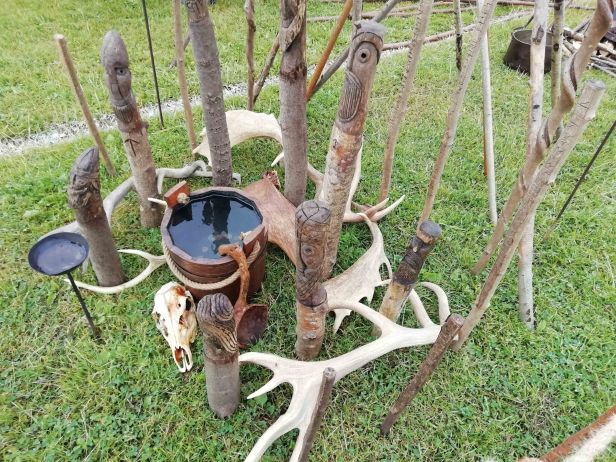 First, while the focus among re-enactors is upon craft and fighting, with cooking as a back-up third activity going on, religious and mythological themes are very much downplayed, including storytelling and performance. Gary provided the exception for his encampment, with his pagan shrine set up. Moreover, he showed me an ongoing project he is working on to embroider various stories from Norse mythology onto a blanket. Also, I got to see once more the Weland casket he puts on show.

Second, as well as seeing the latest productions Gary is working on, we had an enlightening discussion on how some re-enactment groups won’t allow him to be a member now that he requires spectacles to do his craftworking. This left me with the impression that the re-enactment world has some significant issues surrounding ableism, especially if it shows so little flexibility even to long-term participants and practitioners!

I’ve previously identified how the effectiveness and ‘reach’ of the festival is derived from the juxtaposition of different dimensions. The historic landscape is key, including the coastline and the surviving early medieval architecture and stone sculpture at an ecclesiastical setting of St Peter’s church and St Patrick’s chapel. Joining these, are the ‘Viking’ mannequins displayed by many households in Heysham village, the open heritage centre, numerous roadside stalls selling art and antiques, the funfair and trade stalls, and the living history encampment. These elements all rub shoulders with each other over the same weekend. Together, they afford a sense of the multi-facted character of engagements possible with the Viking past, appealing to people of all ages, genders, statuses and backgrounds. This is a truly eclectic Viking experience, where carefully replicated kit is close to stalls selling t-shirts, leather tankards with valknut symbols, and on the first morning, a stall selling plastic horned helmets! It made me reflect that this is a materialisation of many of the dimensions to the Viking world in contemporary popular culture and its diverse appeal. The Vikings are about fighting, family, craft, mythology, but most of all: fun! 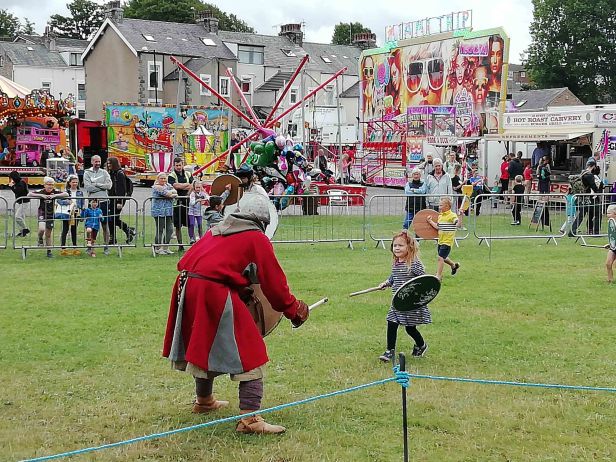 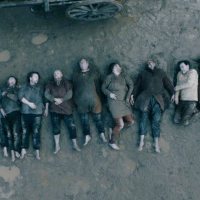