In my undergraduate teaching, and in the MA Archaeology of Death and Memory, we explore death and memory in the recent and contemporary past as well as in prehistoric, ancient, medieval, post-medieval and industrial times. Here I want to discuss again the memorials associated with ash disposal found in present-day municipal cemeteries conjoined to crematoria in the UK. I focus on the complexity of spaces and materials deployed in crematoria’s gardens of remembrance and associated cemeteries.

Note: I won’t mention the location even though it is hardly a secret. This is not because I feel my photographs are intrusive on anyone’s private grief and memorial practices, but in order to keep the focus on broader patterns and themes. I’ve also used some Photoshop effects to help enhance the weird and otherness of modern deathways: maybe I aspire here to evoke a flavour of the David Bowie ‘Ashes to Ashes’ video here. The main point is to look at these spaces afresh and not as mundane and mechanical, and instead as complex and evolving environments – both sacred and secular – of loss, affect and memory.

Each cemetery and crematorium offers a different set of options for the disposal of the cremated dead. As argued before, these create a little-explored, complex deathscape involving plants, water, paths, lawns, plantings and trees, as well as a diverse range of memorials that integral the dead into the designed space through stone, concrete and plastic.

Ashes can be incorporated within traditional (sometimes called ‘purchased’) grave-plots, and common graves, they can be afforded a range of distinctive memorial types within gardens of remembrance.

At the crematorium in question, there are two discrete gardens of remembrance, one simply offering trees as memorials and a scattering and a few benches dedicated along the main path. 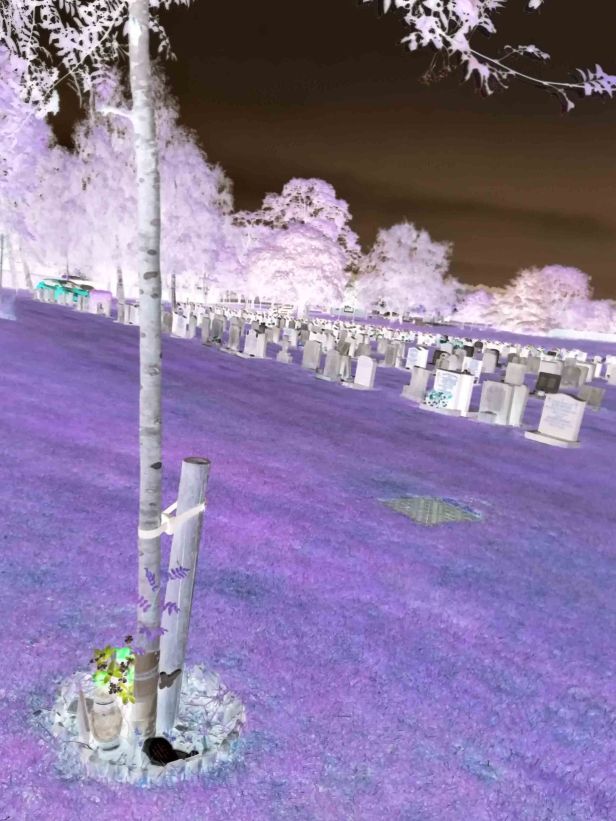 As well as individual memorial benches along the main routes through the cemetery, commemorating either those inhumed or cremated, in the gardens of remembrance there are trees as foci for benches bearing memorial plaques: a collective arboreal focus.

In addition, there are concrete borders bearing memorial plaques and elaborate stone flower-holders as foci for floral dedications.

Finally, we come to grave-plots for the cremated dead, most akin to the traditional grave. There are first grave-like ledgers, some in low back-to-back arrangements in lines, some focusing upon a pavilion, while there are other upright collective arrangements.

I honestly don’t know the name of these or how to describe them, but they afford a faux-Victorian vertical stance of a discrete tomb, but rendered in miniature form. I understand they are called ‘sanctums’.

One further aspect of these modern spaces for the cremated dead I will steer clear of here, namely the ‘rainbow gardens’ created for the graves of children. Separately hedged to contain both either memorials to the cremated dead, or a mixture of cremations and inhumations, they are distinctive, flamboyant and disturbing spaces I consider off-limits for this post…

5 thoughts on “Ashes to Ashes, Funk to Funky: Modern Crematoria”