War memorials seem such permanent and static features of British towns, cities and villages that one imagines they defy the passage of time. Previously, I’ve discussed how the environments of war memorials are far from fixed and can change significantly over time. Many have received many ephemeral furnishings for the centenary commemoration of the First World War. However, some war memorials have also been subject to more significant transformations in location and setting.

In the summer of 2018, in the Denbighshire town of Llangollen, the war memorial was subject to just this kind of transformation. It had comprised of two elements in polished grey granite – a ‘Celtic cross’ for the First World War (commemorating 71 names) and both wars for the parish of Llantysilio, and a smaller plinth for the dead for Llangollen parish in the Second World War.

This memorial pairing shared close proximity and a shared material, if different form. Together, they embodied the memorialisation of two parishes’s losses through two world wars. Notably, the Second World War is commemorated on both monuments: it cost more deaths than could be fitted onto the space on the cross’s plinth, and so only 3 names (for Llantysilio parish) were added there, and a second memorial in the same material, but lower and smaller (and presumably less costly) raised close by for the remaining names from Llangollen parish.

Until 2018, they were placed at slightly different orientations to each other, but both at an angle to the road, next to Barclays Bank facing onto Castle Street beside the corner with Bridge Street. The memorial had been subject to multiple subsequent prior refurbishments. It had looked like this until recently:

Now, things are different. As part of the Centenary Square Project, they have been re-landscaped into a much larger space and realigned to face northwards: ‘carefully relocated with the creation of more space for public events and gatherings’. 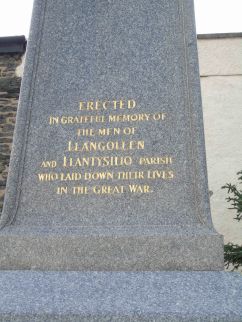 When I visited recently, the monuments themselves have been moved but have remained the same. However, the orientation and access to the space is completely different: instead of opening onto Castle Street and guarded by bollards and iron chains, and framed by mature plantings, it is now open to Bridge Street, with steps down to it from Castle Street. The war memorials have therefore been made more accessible to the through flow of pedestrians, and also a place encouraging locals and visitors to repose in the area as a small public space.

The one odd and striking thing about the new arrangement is the swapping over of the memorial’s spatial relationships – the First World War memorial had been to the right of, south-west from, its neighbour. Now it is left of, east of, the Second World War memorial. 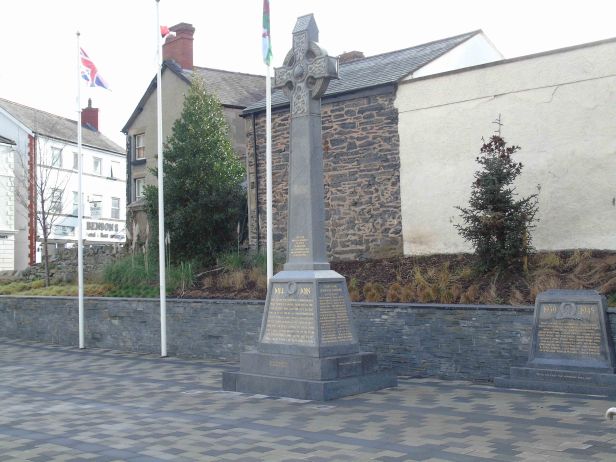 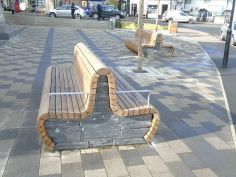 A final point relates to the triad of flag poles, which mirror the three that had been situated behind the memorials in the earlier arrangement. One (right) carries the ddriag coch, the other (left) the Union flag. In between, the central pole bears British Legion’s poppy flies. I find it odd to see the use of the poppy on a flag: was this the plan from the start or had another flag adorned the central position – perhaps a town flag? 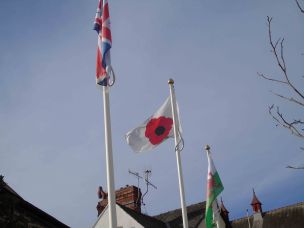 Because the same memorials provide the centrepiece, it might be tempting to see this as a subtle shift in Llangollen’s memorial focus. On the contrary, I would say this is a significant transformation in at least 3 key regards:

Putting these points together and we now witness a marked and significant aesthetic, spatial and functional transformation of a town’s memorial space for the 21st century, quite different from anything I’ve seen before elsewhere.

Notably, no news story or public response has been placed online to this new arrangement. I wonder what the locals think of it all, and whether this large investment of money for the Centenary is actually welcome and will endure in a positive way.

2 thoughts on “A War Memorial Transformed: Llangollen and Llantysilio”