Last weekend, I took a welcome opportunity to visit the denuded stretches of Offa’s Dyke to the north of the Shropshire village of Trefonen, at the invitation of the Trefonen Rural Protection Group.

This section of Offa’s Dyke seems to have rarely featured prominently in discussions of the monument. The topography isn’t striking, but it is complex, and I wonder if this has hindered a reading of the monument’s landscape context. Furthermore, this area has been heavily affected by industrial activity – potteries and collieries – as well as the 20th/21st-century expansion of the village itself, hence it is both unsurprising that the Dyke survives in all manner of different preservational forms from ‘lost’ to the ditch and bank fully intact and has received limited detailed discussion. Therefore, it would be easy to right off the Dyke in this area in telling us much that cannot be discerned better elsewhere in longer, better preserved stretches that sweep across landscapes unhindered by modern development.

After my visit, I tend to disagree. My preliminary impressions suggest that at Trefonen, and perhaps also in other areas like it, we right off the Dyke at our peril. Not only can we confirm the presence at Trefonen of features and behaviours for the Dyke discerned elsewhere, we can propose new insights into the monument from Trefonen where it navigates a surveillance ‘weak spot’, looking uphill with limited viewshed between the watersheds of the Morda and Trefonen’s stream.

There are not only lessons about the monument’s design, placement and location from north of Trefonen, there are also conservation lessons too. The variegated survival of the Dyke here makes the Trefonen section a valuable case study to illustrate wider trends in the life-history of the Dyke, particularly the impact of industrial and modern activity on the character of its survival.

Further lessons derive from Trefonen about scheduling, planning and the considerable local enthusiasm for community stewardship and engagement with the Dyke, notably through TRPG and potentially via the new initiative: CoSMM.

So, in this post, I present some preliminary observations about the Dyke north of the village as it runs west of Chapel Lane and subsequently through the fields to the north of Chapel Lane towards the valley of the Morda Brook.

To help the reader navigate, I’m walking from S to N, and here is an annotated OS map section showing the key points mentioned in the photographs. 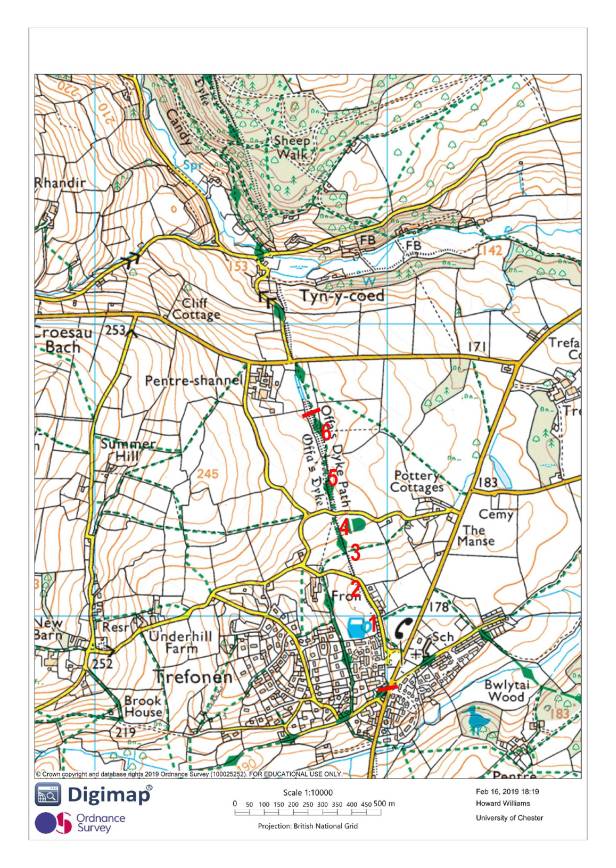 Having been lost in the village but for a small stretch surviving in a front garden of a property by the intersection of Chapel Lane with the main road, the scale and form varies considerably in a discernible section parallel to Chapel Lane. It is near invisible and covered by a series of houses at the start of Chapel Lane, but then appears intermittently in the field, becoming increasingly monumental, if broken, to the N.

What is striking along this stretch is that, while largely filled in, the line of the former monumental ditch of Offa’s Dyke is still discernible in front of the denuded bank, especially towards the S end of this section.

Chapel Lane winds west and crosses the line of the Dyke. Subsequently, as the Dyke rises up the slope to the north of Chapel Lane, it has a continuous and well preserved but hidden rampart obscured within the hedge-line.

The Offa’s Dyke Path joins the Dyke at point 3 and runs up the rest of the hill where it lies under the hedgeline all the way and difficult to fully appreciate, but 2-3m high.

Towards the top of the hill, the bank seems larger still, at least 3m, and remains continuous and substantial, but the ditch is near-absent.

North of the E-W lane and towards point 5, the monument has nearly completely gone, swallowed up by post-medieval agriculture. The stark re-emegence of the bank shows just how dramatically its fate is guided by the individual management of specific fields. In this location, the Dyke enjoys prominent views E towards the Wrekin, but restricted views uphill towards the W

The most astounding and well-preserved short section of Offa’s Dyke presents itself NNW of point 6, as the dyke starts to descend towards the Morda Brook still 1km away. First north of point 6 there is just the bank, but soon the ditch also reappears, cutting a stark V-shaped profile in a comparable fashion and scale to the surviving monumental part of Offa’s Dyke south of Bronygarth.

Just to emphasis the scale of the Dyke at this point, here are some shots on the SSE walk back, with the bank on the left from the line of the ditch.

Walking along this section, something else is apparent: the Dyke is arranged around at least 7 straight lengths aligned at subtly different alignments and for different lengths. This mirrors a pattern identified elsewhere by Keith Ray and Ian Bapty, and I’ve discussed before in regards to Hawthorn Hill south of Knighton.

This is actually very clear on the OS maps of the line, although I’ve guessed some of the details and dashed the line of the postulated Dyke now lost beneath the village, but where I suppose there might be 2 adjusted segments. 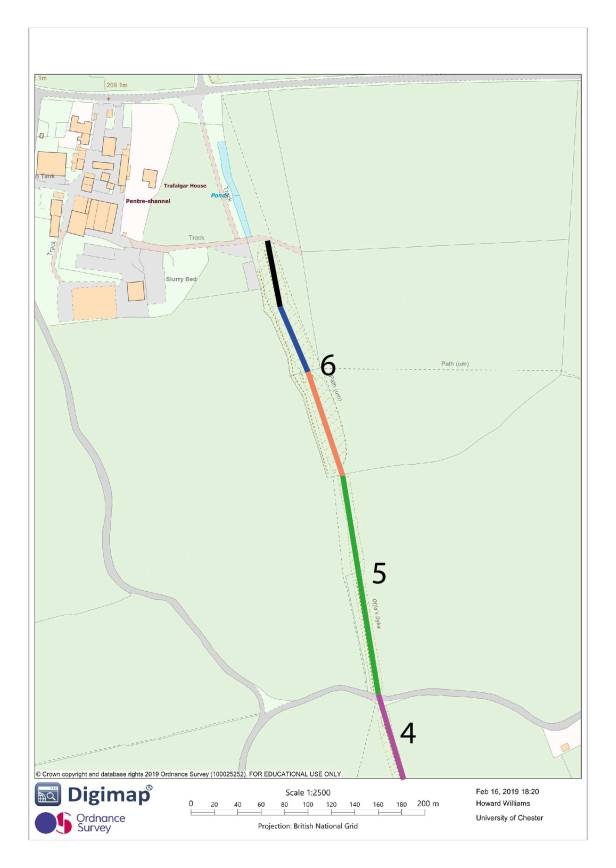 What we have surviving north of Trefonen is a stark set of contrasts in the survival of the ditch and the bank. North of point 6, a short section rivals any others known surviving elsewhere along the line of Offa’s Dyke in terms of both the breadth and height of the bank and the V-shaped depth of the ditch. Elsewhere, the ditch can be discerned where it has been suggested to be long lost. In other places, the bank survives continuously, in further locations it is intermittent.

So this 0.75km stretch of Offa’s Dyke reveals much about its original form and placement, as well as its variegated afterlife.

3 thoughts on “Offa’s Dyke at Trefonen”