In two previous posts (here and here) I’ve suggested a particular connection between monuments that move and the commemoration of children. Movement takes many forms: actual and implied. Still, this recent addition to the National Memorial Arboretum confirms my point in both these senses. Opened in 2016, it is the National Scout Memorial. The memorial is a stone circle for scouting, incorporating multiple components. It contains sculptures by Graeme Mitcheson and a central fireplace by Angela Connor. The memorial both contains portable things frozen in motion and in acts of use, and has a moving element to animate it. 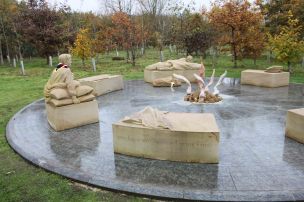 The monument sits in an exposed area between various memorial woods at the NMA. The memorial is a lithic campfire. It comprises a dark grey marble circular space inscribed with the references to the global scope of the Scouts. Contrasting with this marble are seven light yellow sandstone semi-circular plinths, each inscribed on the outside with fragments of a quote from the founder of the Scouts: Baden-Powell. I didn’t photograph them all, but from 5 I did I suspect the full quote is:

Upon three of the plinths are sculptures of sleeping figures: a Scout leader in a sleeping bag but propped up and watchful over the other figures of scouts. Upon one is a sleeping girl, upon another are two boys: one awake and staring at the flames of the campfire, one asleep. At the foot of the boys is a pack and a pair of boots.

On the other plinths are sculpted items of the Scout’s material culture: books (including Baden-Powell’s Scouting for Boys and Kipling’s Jungle Book), scarf, map and compass, and a flag. Together, the bodies of the children and their leader, and these items, encapsulate the scouting world, circulating around the campfire and the focus on outdoor activities this connotes.

Actual material cultures enhance the associations of the sculptures and the monument as a whole. Added to the monument are wreaths beside the figures, but also scarves wrapped around the necks of the elder sleeping boy and the leader. 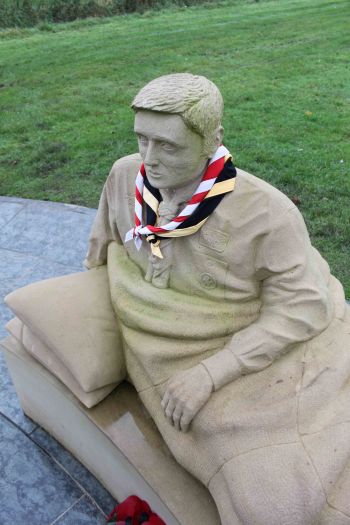 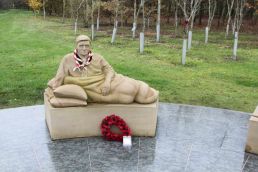 So everything is in tension between stillness and movement in this monument: things actual and sculpted, representing the identity of the Scouts and commemorating the organisation, its founder, and its former and current members.

The moving part?  The very focus of the memorial camp: the campfire itself. The sculpted flames move and revolve when touched.  Yep, the frozen fire that moves…

So the monument moralises and commemorates via movement and stillness, wake and dreams, in this memorial fascination with childhood and a child’s organisation through a stone circle for scouting. 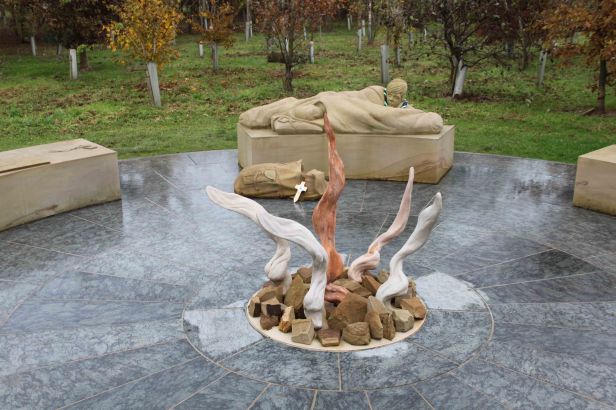 I confess, I find this monument deeply disturbing…