I’ve now watched the first season of The Last Kingdom from 2015, and blogged about its fire and death. Here I turn to the megaliths of the 8 episodes.

So The Last Kingdom’s set designers have a clear way of articulating the antiquity of the British landscape in which the Anglo-Saxons and Danes are inhabiting: megaliths. Yes, it’s an age-old trick deployed since the 19th century and the birth of the novel – Saxons live in an ancient land, and megaliths – the ruins of the Celts and all that they embody – materialise this antiquity. We find it in Sir Walter Scott, they are found in Tolkien’s Barrow Downs, and we find them in the writings of Bernard Cornwell.

If there is any real-world monument that embodies this reality of this spatio-temporal intersection of the past in the early medieval period, it is Wayland’s Smithy: a Neolithic chambered tomb re-dedicated to the legend of the Germanic shaman-smith Weland (ON: Volundr) sometime before the 10th century when its name is recorded in the charter bounds of Compton Beauchamp.

Megaliths are thus portrayed as the vestiges of primeval times. They aren’t explained. They aren’t integrated into the script. They are just there in the background of TLK, oozing antiquity and laden with moss. But they are more than this. In addition, they do ‘speak’ to the audience without dialogue, and not only as apparitions of a lost, unexplained past. They are landmarks and places of significance for the enactment of socio-political power and authority, meetings to settle disputes, and muster forces. In short, their presence is neither arbitrary nor ubiquitous for the fictional landscape of late 9th-century Wessex. They are deployed as contexts and settings for very particular encounters in the fictional early medieval landscape. How and why?

First, let’s look at how the other recent show depicting the 9th century and deploying megaliths: Vikings. This contrast is instructive.

Vikings Season 2 really sets the precedent for TLK as there are three megaliths on a hill depicted when the army of Horik and Ragar move down-slope out of woodland to encounter the combined forces of Aelle and Egbert. Notably, Floki – the avoid heathen – notes these stones that moments before had been topped by a crow, and seems to recognise them as evidence of former pre-Christian inhabitants. They are thus shown as pre-Christian, and appear at a prominent place where armies meet for battle. However, their presence doesn’t help the Northmen, who lose the battle.

There is also a stone circle depicted in the background of a scene of the Viking army in Wessex in Season 4 part 2. Again, this portrayal relates to Floki, but there is no direct or clear connection between the action and the stones. the stones appear incidental. I half-wonder whether they relate to a section of the storyline edited out. 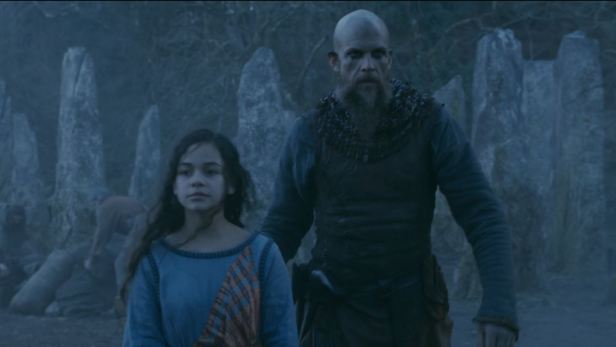 This is all I have noticed. Notably, nowhere in Vikings is there a subsequent engagement with megaliths in a more serious fashion, although their presence on a battleground is noteworthy. A pagan significance is also alluded to, and a vague sense of the pagan past is transmitted to the characters and viewers by their presence.

Let’s now turn to The Last Kingdom, where megaliths are more diverse and integrated into the story and its landscape.

Meeting at a Stone Circle

Megaliths appear early on in TLK, where we find an stone circle provides the unexplained venue whether the Danes and the nasty uncle of Uhtred’s – Aelfric – meet to negotiate the exchange of Uhtred as a hostage. 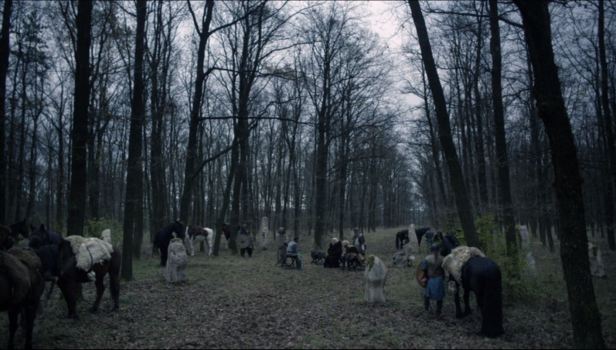 Then we encounter a stone row, seemingly ancient, and marking the division between Anglo-Saxon kingdoms. In this instance, Uhtred and Brida are riding from East Anglia into Wessex. We are left to wonder regarding the significance and antiquity of this boundary.

Outside Odda’s vill, Uhtred meets with Skorpa the Dane at a single standing stone. Again, no explanation, but the stone frames the approach to the settlement and is the focus of the brief and tense meeting on horseback. 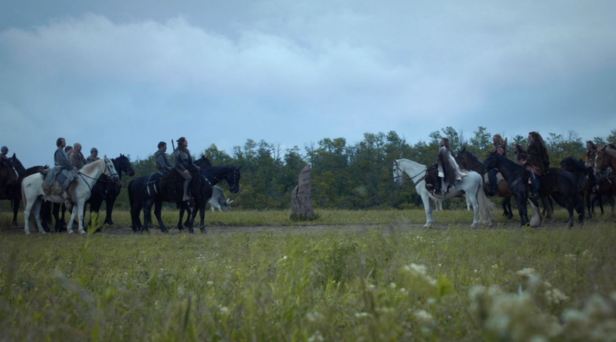 Yet it is the last of the megalithic monuments that is of key significance for the story, and of direct relevant to the historical and archaeological underpinnings of this historical fiction, based as it is on the novels of Bernard Cornwell.

Returning from the Severn Levels, Alfred gathers his forces, as the Anglo-Saxon Chronicle tells us he does, at Egbert’s Stone before moving to fight the Danes at Edington.

We do not have surviving evidence for what this monument might have looked like, but its appearance here very much represents a complete lack of understanding of the basic toographical settings and typology of known prehistoric megalithic monuments from the British Isles, let alone Wessex specifically (here presumably Somerset or Wiltshire). Any brief dip online would have furnished a raft of suggestions for more plausible megalithic arrangements to depict, from Avebury and Stonehenge to Stanton Drew and the Rollright Stones. We seem to have, only shown in part, a low dolmen, incongruously set at the centre of a crude and partial stone circle, all situated on a prominent hilltop. 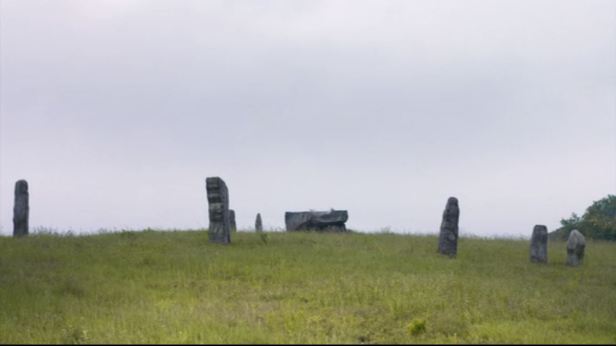 Notably, the forces of Alfred do not gather among the stones, but they leave Alfred to go there alone, to contemplate his future and to meet his fate. Will his messengers come back with the fyrd? His rival and nephew, sees Alfred alone among the stones, seemingly exposed and unarmed. Aethelwold approaches him, half-drawing the seax given to him by Guthrum, contemplating murdering Alfred. Instead, for whatever reason, he decides to side with his uncle and king and three armies converge on the hilltop from out of the trees, giving Alfred the forces he needs to fight the Danes.

Egbert Stone, as much as the battle to follow, secures Alfred’s salvation.

Egbert’s stone is therefore key to the story, and the fortunes of Wessex turn at this key location. It is sacred in this regard, as a place of assembly hallowed by time and where the stories of ancestors and their victories in battle might be invoked. They might also be places where prayers and speeches mobilised morale and courage for the fell deeds the future might hold.

Egbert was after all, Alfred’s grandfather, so was his ‘stone’ not his burial place, but a place where he held a witan, or indeed fought a decisive battle? Let’s imagine a cross-series mash-up between Vikings and TLK where this is the site of Aelle and Egbert’s victory over Horik and Ragnar, for example?!

The stones are ancient, but not completely mutable. They are a place powered by destiny, where God finally comes through on Alfred’s side! Megaliths are shown as the axes upon which fortunes of kingdoms are decided.

So is TLK accurate here?

Notwithstanding the rather mish-mash megalithic appearance of Egbert’s stone, suggesting the set designers may have never actually taken a trip to see either an early Neolithic dolmen or a Bronze Age stone circle, it isn’t completely implausible in showing megaliths in this way in broader terms.

We know that early Anglo-Saxon cemeteries (5th-7th centuries AD) often reused ancient monuments, including many of prehistoric date. They could be occasionally in proximity to megalithic monuments, notably the Rollright Stones from Oxfordshire and Arbor Low in Derbyshire.

Their uses in later centuries are less clear. Yet we have numerous charter references to stones as prominent points for marking boundaries. Like Wayland’s Smithy, we have megaliths with Old English place-names. Moreover, we know that stones were used as places of assembly and mustering. I’ve discussed this for the mound in the Vale of Pewsey: Swanborough Tump. Thus, ancient stones were afforded names, served as landmarks and boundaries, and could be places where hundred and shire moots occurred.

Notably, our best evidence for the reuse of a prehistoric monument, if not a megalithic, in the 9th century is from outside the Anglo-Saxon kingdoms… just. I refer to the Pillar of Eliseg near Llangollen, Denbighshire. This may well have been an assembly and mustering point in opposition to the Mercians and other Welsh rivals, linking the dynasty to a mythological past through the text, form and materiality of the stone-carved cross raised on the mound, honouring as it does the great-grandfather of the Powysian ruler Cyngen: Elise. Notably, Cyngen was a contemporary of Egbert, Alfred’s grandfather.

A large amount of archaeological and historical work, driven forward most notably by Professor Sarah Semple of Durham University, has attempted to consider the early medieval affinities with select megalithic monuments as far from random. Ancient monuments, including some megaliths, might be seen as places of fear: monuments allowing intercessions with other worlds and/or regarded as the creations of ancient, dead races of giants. But this isn’t Brave or Outlander, and the Anglo-Saxons didn’t seem to see them as portals to other dimensions by the 9th century. Instead, they were places of fame and infamy, landmarks for assembly and mustering armies, where great and memorable deeds might have been perceived to have taken place, or from whence significant events unfolded.

So, in crude terms, that’s what The Last Kingdom shows. Megaliths are all!

11 thoughts on “The Last Kingdom Season 1 – Megaliths are All!” 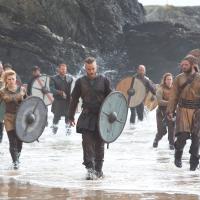