On a lens of land between the current route of the A476 between Cross Hands and Llandeilo and its older route which now abruptly stops in a dead end, the community of Carmel, Carmarthenshire, selected to build a distinctive monument for the Millennium. It is a ‘prehistoric’ cairn of stones, reached by two steep paths from an unused cul-de-sac, the former route of the A476. The paths ascend from gaps in the roadside stone wall, each paired with a heritage board. A third heritage board fronts the cairn itself. Set within woodland, the cairn and its context is invisible, even in winter, to those using the modern A476. 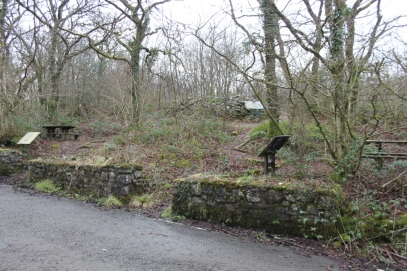 The three boards together outline the history of Carmel, its region, and the cairn as a monument of prehistory and the 21st century.

The one by the left-hand entrance, positioned so it is almost impossible to stand in front of it and read it, is about the region’s geology, history and archaeology. The central artwork depicts a traditional Welsh rural scene, the complex geology of the region (limestone and millstone) and an impression of a fragment of early medieval manuscript – the Lichfield Gospels (Llandeilo Fawr Gospels). Together these images evoke the interaction of people and landscape since early times upon the Gwenlais Valley. The estate of Meddynfych is mentioned in the Gospels and it might relate to the valley close by. The text, itself evoking medieval manuscripts, is near-impossible to read, especially now dirty, worn and rendered in green (for Welsh) and red (for English).

The heritage board positioned by the right-hand entrance follows a similar design and font. It bears information about the industrial past of Carmel: lime production in particular since the 16th century using the combination of limestone and woodland. The Rebecca Riots (1839-43) hit this area heavily and focused on objections to tollgates that (among other things) made accessing the lime very expensive for farmers travelling from across SW Wales to the area.

The third and centrally placed heritage board is by the oblong drystone cairn. It is now heavily damaged by a concerted effort by someone to break it up. It describes the work by Cambria Archaeology (Dyfed Archaeological Trust) to excavate a cairn on Carmel Mountain ahead of its destruction. The cairn was found to date to c. 3000 BC and raised upon a rock outcrop into which natural fissures and niches in the bedrock were used to deposit the remains of the cremated dead. A Collared Urn was recovered, dating to 2400-1800 BC.

The panel goes on to explain what the community decided to do:

Once the stones had been removed from the cairn, the local community were concerned that they might just be discarded. In recognition of the fact that the stones were originally gathered for cultural and spiritual reasons, it was decided that at the very least the stones should be collected from the mountain and placed somewhere for safe keeping. While it had not been possible to reconstruct the cairn to match the detail of the original, the cairn you now see is constructed in a similar manner, with the original stones laid over boulders used to simulate the stone outcrop. The reconstruction of the cairn was undertaken by the Community Millennium Project by volunteers and with the help of …

Crucially, the part-eroded text goes on to make clear that a replica of the cinerary urn, and a time capsule, were buried in the cairn!

There are also two picnic benches beside the paths to the cairn, both heavily  covered in moss.

So we have the actual stones of a prehistoric monument, re-located, re-arranged, and set within a heritage context of boards and picnic tables, located by a cul-de-sac adjacent to a major modern road. Notably, the cairn as reconstructed, an oval set on steep drystone edges, looks nothing like the cairn overlaying bedrock that was excavated. All of this to celebrate the history of the community and its environs for the Millennium.

The entire affair seems never to be regularly used or visited since it was created. Its delipidated appearance is nothing new. Indeed, it looks today much as it looked soon after creation in 2001 when I first visited: neglected and in decline.

The cairn and its context is disturbing and depressing, forlorn and sublime, a monument dislocated and reconstructed in a fashion that contrasts with its initial position over a natural rock on a prominent hill.

It is most certainly a failed millennium monument, both out of time and on a road to nowhere. 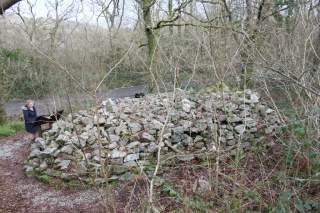 One thought on “A Prehistoric Millennium Time Capsule at Carmel, Carmarthenshire”