Especially concerning the National Memorial Arboretum, I’ve repeatedly addressed arboreal commemoration in this blog. Commemorative trees are a dimension of heritage sites too, and notably they often have royal subjects when they do.

Welsh castles and abbeys often display complex commemorations linking royalty pasts – legendary and historical – and the present through art and commemoration. Examples include Conwy Castle, Harlech Castle, Flint Castle but perhaps most notably at Caernarfon Castle. It doesn’t always go right, as the recent case of Flint has proven.

Previously I’ve discussed how these themes – the arboreal medium and the royal subject – come together in wooden memorials, as for example, with the wooden royal commemorative carving at St Dogmael’s Abbey. 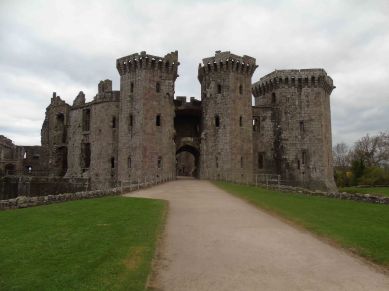 A further striking example of the coalescence of arboreal medium and royal commemoration is at Raglan Castle in Gwent.

Visiting last year, I encountered memorial benches, but also an example of a commemorative tree that commemorates the investiture of Charles as Prince of Wales, an event held at the castle in commemoration of the investiture, the local aristocracy, and the local history society.

TO COMMEMORATE THE INVESTITURE OF

A BANQUET WAS HELD HERE AND WAS

ATTENDED BY THE DUKE OF BEAUFORT,

TO MARK THESE EVENTS THIS OAK TREE

One thought on “Arboreal Royal Commemoration at Raglan Castle”