Back in warmer weather, I took a walk along Offa’s Dyke on Hawthorn Hill where there is a fabulous section of the monument with dramatic views west over the Radnor Forest. I took a digression to the top of the hill which is a likely watch-tower/beacon site when the dyke was in use.

En route, I also briefly side-tracked to observe the monument to Sir Richard Green Price. Situated on a small knoll east of the line of Offa’s Dyke, it seems justifiable to regard this as a monument situated in response – in part at least – to the early medieval monument and its dramatic landscape situation. 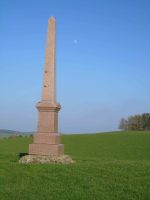 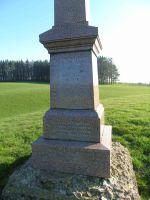 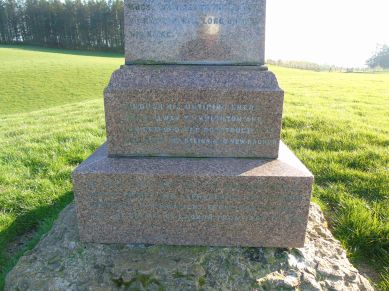 The monument takes the form of a dark-red marble obelisk situated on a rough base. It commemorates a Liberal MP and Radnorshire landed gentleman. Price’s contributions to the county are noted as is his parliamentary service. Most prominently, his role in bringing about railways for the county is celebrated. Here’s the text on the north-facing (i.e. road-facing and downslop-facing) side of the monument. It starts on the shaft of the obelish’s needle.

WAS ERECTED BY SUBSCRIPTION

TO PERPETUATE THE MEMORY OF

WHOSE SERVICES TO THE COUNTY

OF RADNOR, WILL LONG OUTLIVE

Below, the memorial continues off the pillar onto the second base:

THROUGH HIS UNTIRING ENERGY

THE RAILWAY TO KNIGHTON AND

LLANDRINDOD WAS CONSTRUCTED AS

WELL AS TO PRESTEIGN, AND NEW RADNOR

On the base itself the text continues yet again:

HE EVER LABOURERED FOR THE WELFARE OF HIS

NATIVE COUNTY, AND REPRESENTED THE RADNOR

It is difficult to know whether the association with Offa’s Dyke is purely coincidental of other factors: proximity to the road from Knighton to Presteigne and a dramatic view westwards over the county.

Its form, an obelisk, constitutes a fairly typical monument of the late Victorian era, and evokes not only ancient Egypt but cemetery culture of the early/mid-Victorian era. It also is one of the monuments that pre-figures the style of memorials raised across the land to the Boer and First World wars.

In all regards, this isolated  monument is the epitome of how monuments of the 19th century assert links between past and present, a single ‘great’ male individual and the place (in this case county town and county), through landscape situation.

It stands prominently and in isolation in a field, visible from the distance from the public road, and on a natural mound akin to a prehistoric burial mound. Moreover, it is situated beside Britain’s longest ancient earthwork as it navigates the western side of Hawthorn Hill.