The third of the level 5 field trips linked to the module The Contemporary Past took us to look at industrial and post-industrial landscapes. Not far from Chester, but in very wet conditions, we investigated the current landscape of Pandy, near Gresford: the former site of Gresford Colliery: 1907-1973. This allowed us to identify multiple dimensions of late 20th/early 21st-century landscapes: how they change and adapt as the result of varying pressures, and following the closure of coal mines.

We therefore looked at the variegated transformation of the Pandy landscape and how it is memorialised, both in terms of formal memorials, but also in terms of the reuse and abandonment of the landscape. For my other posts on industrial landscapes, and more, follow this link. 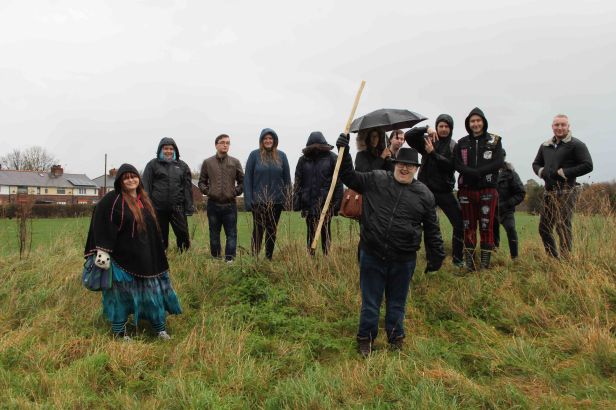 First, we explored using circulated historic OS maps the aspects of the landscape before the colliery was established. Across the Alyn is the Iron Age hillfort of Bryn Alyn. I took the students to see a stretch of Wat’s Dyke and discussed the lack of any sign to tell visitors of this nationally significant monument. I discussed the historic trackways, farm and field boundaries around the Pandy area. The crucial question of how Wat’s Dyke was sited; and why it crossed relatively flat ground facing upslope, was addressed – it was jumping between watercourses at this point – the Clywedog and the Alyn. This made a good point I wanted the students to be aware of: sometimes fabulous and nationally significant prehistoric and early historic monuments rub shoulders with traces of the recent past and this enhances, rather than detracts from, each. In this case, neither Wat’s Dyke nor the wider landscape of the colliery beyond the mining disaster memorial, have any heritage interpretation whatsoever for visitors to appreciate.

Then, we talked about how the precise orientation and location of the colliery clearly owed much to the line of the Chester-Shrewsbury railway line, which became part of the Great Western Railway in 1854. 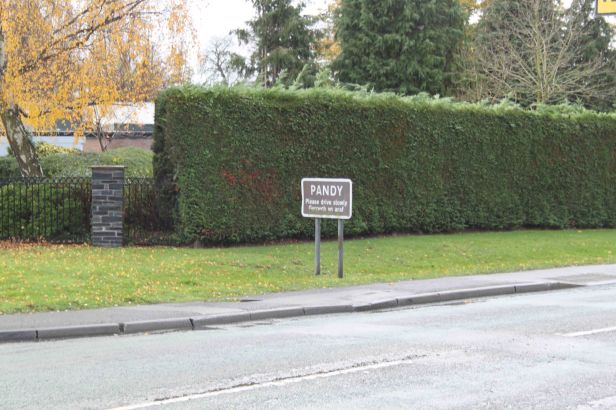 Next, we moved onto the colliery and its environs. discussed the surviving housing estates built adjacent to the colliery, the social club and sports field that have survived since the mining operations.

What happened to the colliery? We saw the reuse of the coal mine as an industrial estate as well as the reworking of the road network with the building of the A483. There are also smaller businesses, including ‘Ancestral’ conservatories and a car wash.

Of course, the recent new housing estate built over former railway sidings was particularly interesting. Building on our previous discussions of road names and their significance, we discussed the allusions and choice to detaching the estate from its industrial and local history but giving the estate road an allusion to a southern English market town: Westbury. 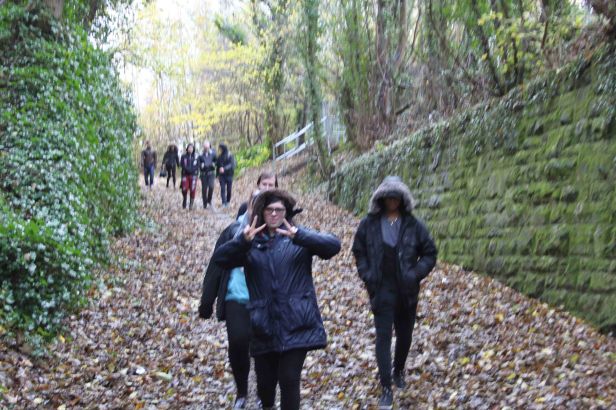 In addition, we explored aspects of those areas that remain abandoned and review traces of the colliery – across the railway line we found the spoil tip beside the Alyn: a true derelict landscape, yet planted with trees and used by off-roading vehicles despite the warning signs to the contrary. Moreover, paths through the woods that were the former railway sidings serving the colliery, linking to the coal tip, allow this space to serve for leisure and recreation for local people. Close by, there are entire country parks created from former coal tips, as at Alyn Waters and Hafod.

We also were interested in the reuse of concrete cylinders to block the entrance to mechanised transport, and the signs warning parents of dangers and restricting the use of off-road vehicles.

Finally, we looked at the Gresford mining disaster of 1934 which cost 266 men’s lives – the key thing that people associate with the former colliery and its history. Established in 1982, the memorial to the mining disaster is a striking feature of the landscape.

This is a multi-phased memorial. First, it reuses the winding gear from the closed 1973 colliery. This is the centrepiece of the memorial, evoking the former presence of the colliery using its most diagnostic feature in the landscape. Moreover, there is a striking tension in a wheel that is fixed and cannot be turned, which can be taken to evoke the lives of those lost fixed without moving on, entombed within the mine.

The memorial has a biography – established in 1982, with a 2000 memorial plaque with the names of all those who lost their lives. The most recent addition is a new style of iron memorial bench, with cut-out scenes evoking below-the-ground mine-working. I’ve seen war memorial benches adopting a similar design: the bench is now more than a place of repose and reflection, appended by textual memorialisation, it envisions the activities and people commemorated through this scene.

Having explored cityscapes, and suburban spaces, we have now dealt with industrial and post-industrial landscapes. Next, we will be exploring transport and communication in the landscape in the Ruabon area. 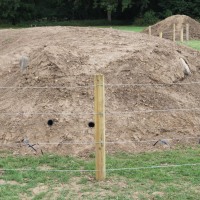