At Ness Botanic Gardens one can find a scale replica of Stonehenge – Nesshenge –in addition to a fascinating range of trees and plants from around the world, and many designed garden and water features.

The gardens, owned and run by the University of Liverpool, also contains many memorial plaques. I noticed two interesting ones when I visited in the summer: one commemorating the gardens themselves and their donation. Below it, an additional plaque commemorates the building of the wall! Then there is a second connecting a particular area to a gardener who reached the grand old age of 96.

In addition, there are a range of memorial benches, part of a coherent memorial style. Many afford locations of repose within the gardens to enjoy the plants and water, but some are situated so as to view out over the landscape beyond, across the Dee Estuary towards Wales.

These benches are no randomly situated and arranged. Many appear in groups: gaggles of benches. Incidentally, is there a collective noun for benches? A ‘repose’? A ‘rest’? A ‘loiter’?

So these benches populate almost every part of the gardens, giving visitors many places to walk but also sit and gaze. They have a systematic set of bench styles. Moreover, the benches are consistent and numbered to facilitate maintenance.

Upon many are memorial plaques to former visitors, supporters, and I suspect also university academics, are replete. Most memorials are centrally placed on the top of the front-side, although for larger curving benches – so vast they could accommodate a family of 7, the memorial plaques are on the lower front-side.

Most are in a good state of repair although occasionally I noticed instances where maintenace was required.

Then there are a few interesting transplanted material cultures on display in the grounds. I want to briefly alert readers to these as instances of how an historic garden can not only accumulate memorials and archaeological experiments, but also transported and re-assembled ruins and architectural features.

I’m fascinated by the idea of a ‘headless cross’. Like the Pillar of Eliseg, it is defined by its fragmentation and a key absence of its ‘head’ as a ‘cross’. The botanic gardens therefore serves as an open-air museum for this already ruined and ‘headless’ medieval cross, relocated from Parkgate. 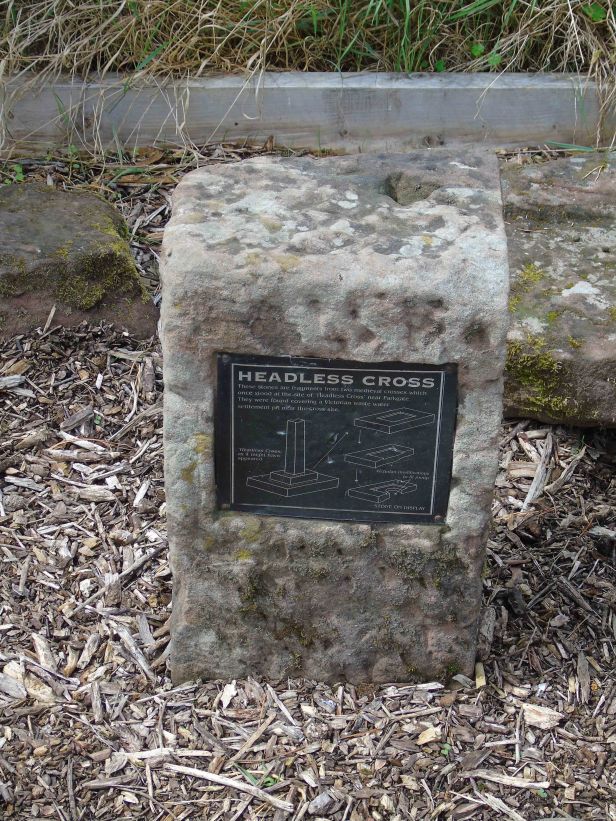 Then there were random ‘ruins’ – these three columns. From whence do they come? What are their age? I’m not a Roman column expert, but I’m half-minded to suggest these came out of Chester at some point…

Finally, there is the fabulous garden feature near the entrance: a trace of industrial archaeology relocated from Chester to serve in the congenial environment.  From beer to a botanic setting. 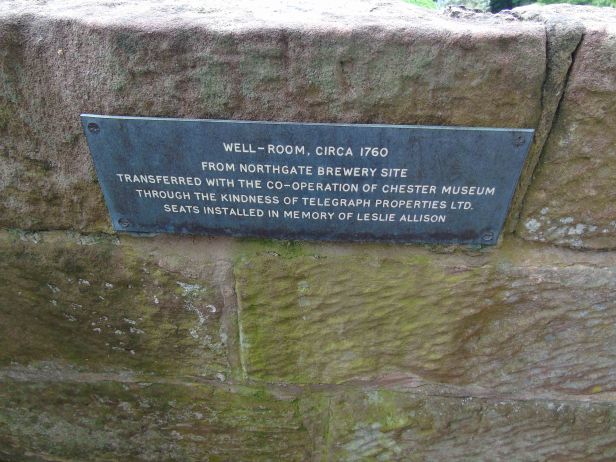 What do we take from this? Well, gardens are unquestionably a space of memorialisation. Yet unlike the National Trust, Ness are keen to attract a wide range of memorials into their gardens, binding people living and dead to the garden space. Moreover, they commemorate themselves and they serve to capture time, by drawing antique features from post-medieval breweries to a medieval cross, into the garden space.