This morning I visited the superb parish church of St Mary the Virgin, Overton, Wrexham. Its fabric dates back to the 14th and 15th centuries. Its yew trees are wonderous and the graveyard and church have many features of historic interest.

When I was visiting, with four of my offspring, the bells were ringing in practice, and we got in and explored while they chimed. A kindly flower-arranger directed me to one of the funerary monuments hidden by a pew. All told, we got to see 4 medieval funerary monuments. 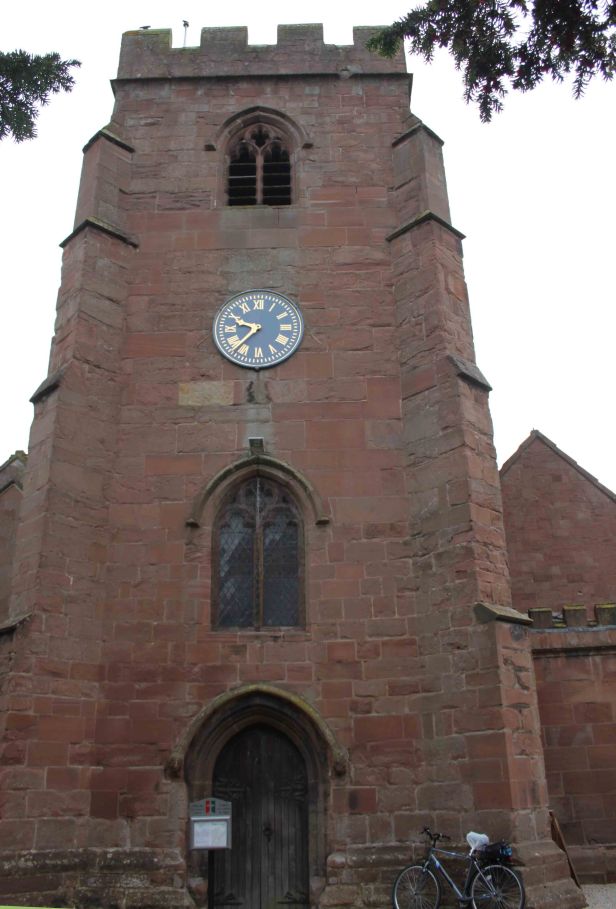 Published discussions of the funerary monuments

This is loose on the floor of the north aisle (Gresham 1968: 88). It is the fragment of the lower part of a trapezoidal grave slab with an inscription in false relief Lombardic capitals running around the edge. Meanwhile, curving stems emerge from the mouth of a lion with three-lobed leaves, interpreted from the fragment as possibly originally comprising of the memorial text:

Here lies Angharad, daughter of Euniawn. Pray for her 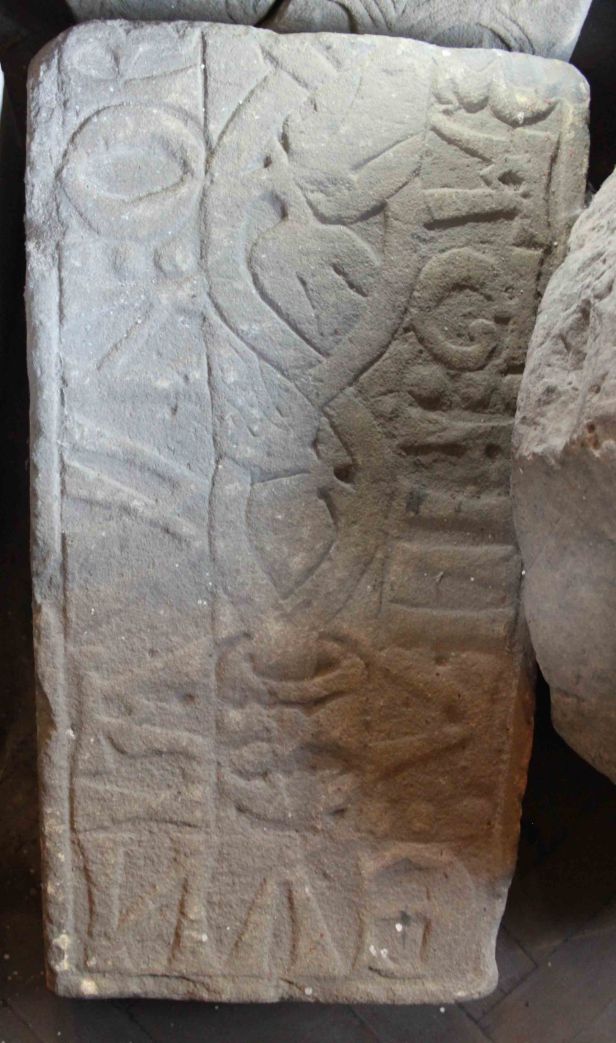 Part of an ‘early 14th-century’ cross-head built upside-down into the base of the westernmost pier in the south arcade. The expanded arm cross isn’t clearly dated, and so an early 14th-century date is provisional (Gresham 1968: 102; see also Hubbard 1986: 411). Indeed, this stone could be arguably far older and there are also early medieval stones of a similar design as well as 14th-century parallels. 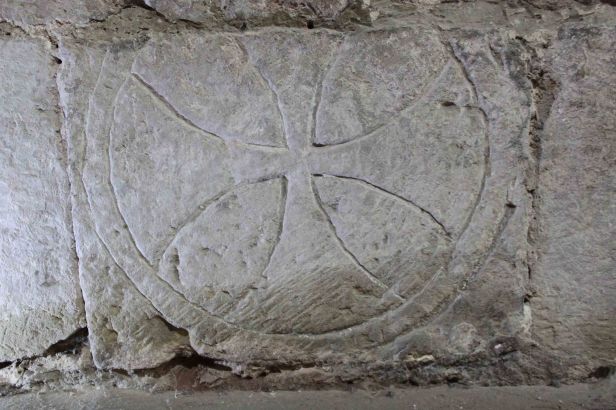 This is a four-circle cross surviving as a fragment. It has four incurving ribbed stems, situated back-to-back and bound, with a plain quatrefoil at the centre. The shaft is ribbed. It is positioned, propped up against a pew with the front part-obscured by Gresham 37. Therefore, a photograph face-on isn’t possible. It exists now in two fragments, although Gresham recorded it at a single piece (Gresham 1968: 122; Hubbard 1986: 411). 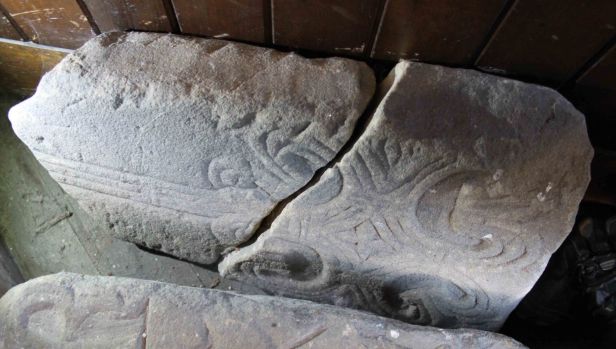 This amazing stone is propped up against Gresham 37: shocking in itself! More shocking still, it was left unrecorded by Gresham, who according to Gittos and Gittos (2012)  didn’t regard it as of ‘the Welsh school’.  Seemingly monuments had to ‘look’ Welsh as well as be found in Wales to enter Gresham’s corpus!

The stone is briefly described by Hubbard (1986: 411) as ‘Part of a slab with a recessed but, in relief’. Thankfully, Gittos and Gittos include it in their long list of omissions by Gresham and describe it effectively as:

Loose in the north aisle between pewes with most of the other stones in March 2012. Fragment of a semi-effigial slab showing the bust of a man with hair in a roll curl and holding a heart. His head rests on a cushion but, due to severe weathering, little detail remains except for his eyes…. The semi-hexagonal outline of the head is paralleled on coffins at North Priory (Cheshire) and an indent at Shrewsbury.

This is a truly distinctive semi-effigial monument, and there might be traces of a shield or heart-shaped motif on the stone below the hands and heart. There is only one other heart-holding effigy from Wales, again not recorded by Gresham: nearby at Chirk (Gittos and Gittos 2012: 380). This is in itself an odd and immediately incomprehensible monument showing a figure holding a heart on top of the head of another future. What is the meaning of heart-holding? Is it denoting a ‘heart-burial’, or faith? I’d invite comments on the particular significance of this feature.

For me, what is fascinating about this monument, seemingly not photographed in a scholarly publication thus far, is its possible smile. Given the rare and disparate parallels for other smiling effigial representations for the Smiling Abbot, this is something of a revelation to me since this feature isn’t mentioned in the existing descriptions.

I think the guy looks splendid: like a medieval Chevy Chase.… 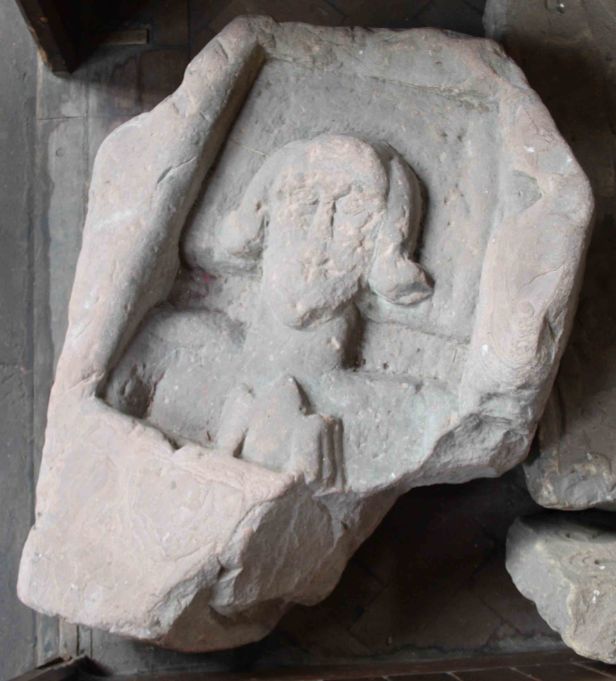 These stones lack any interpretation. One is obscured behind a pew and three are propped in random positions and precariously within the north aisle of the chancel. This is a woeful state of affairs for an important collection of medieval funerary monuments and I hope that their conservation and interpretation can be significantly improved. 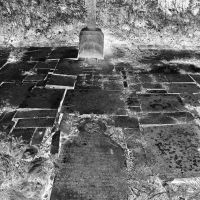 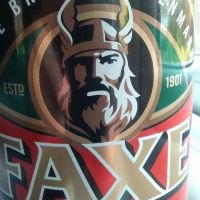 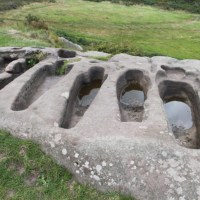