On 11th September 2017, I was honoured to contribute to a memorial event at the Society of Antiquaries of London in memory of Professor Dai Morgan Evans in the presence of Dai’s family as well as his many friends and former colleagues. All told, there were about 70 people in attendance for an hour and a half of talks, followed by a drink reception.

I have previously posted an entry about Dai’s passing here. Subsequently I was privileged to pay my respects by attending Dai’s funeral in Surbiton. Yet I’m still coming to terms with what Dai meant to me personally and professionally. The memorial event gave me a chance to express my thoughts and feelings about Dai and celebrate his achievements.

Gill Campbell introduced the event before Chris Musson outlined the earlier parts of Dai’s career as a student at Cardiff and subsquently with the Welsh inspectorate. Moving to England, Christopher Young then reviewed Dai’s contributions to the English inspectorate in its many dimensions. He was followed by Rosemary Cramp giving her reflections on Dai’s significant contribution as General Secretary of the Society of Antiquaries of London.

I then picked up the story to reflect on Dai’s varied post-retirement activities. First, I mentioned that Dai’s fascination in archaeology began in Chester at an early age, and this partly inspired his return to Chester as a Visiting Professor. I emphasised the scale of his role; he wasn’t a passive honorary affiliate. I spoke about Dai’s contribution to teaching students at Chester, and his enthusiasm and vision for field-based research that instigated Project Eliseg. I then moved on to some of Dai’s other near- and post-retirement activities: namely his role on television. I discussed Dai’s contributions to two television programmes involving the construction of Roman buildings using traditional methods: Rebuilding the Past and Rome Wasn’t Built in a Day. I showed clips of Dai from the programmes and recognised their distinctiveness as experimental archaeology projects. I then summed up my gratitude, and those of my colleagues and students, to Dai for his support and friendship.

Following my talk, former librarian at the Society of Antiquaries of London, Adrian James, read out a poem reflecting on Dai as General Secretary. It was great fun. Gill then closed the meeting and invited Dai’s widow, Sheena, to say words of thanks. We then piled out to the foyer where Andrew Selkirk’s photographs of a SAL outing were displayed and Stephen Dunmore gave a toast in honour and memory of Dai. I then got the privilege to natter to the audience and got to meet Dai’s daughters.

All told, it was a fitting and moving occasion, and I feel I’ve started on a new stage of my journey towards a fuller appreciation of the debt of gratitude I owe to Dai Morgan Evans.

Thanks are due to Renee LaDue and her colleagues at the Society of Antiquaries of London for hosting and facilitating the event so efficiently and to all those who attended. For those who were unable to attend, a video of the memorial talks and poem is available here. 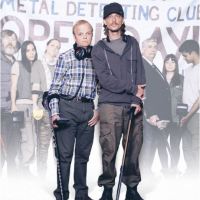