I come back to this blog’s theme of art and sculpture at Welsh medieval castle sites, most recently discussed in relation to Flint Castle.

In that recent post, I criticised some of the new art inhabiting these ruins and the intentions and connontations associated with it. However, my trip earlier this year to another Edwardian castle in North Wales – Harlech – gave me a completely different impression. 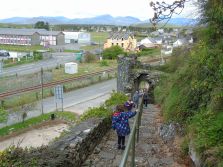 The new Cadw sign boards that I’ve criticised elsewhere are far more effective for this castle, partly because they seemed better written, partly because they were deployed in considerable number, rather than in isolation, so that the complex history of the castle could be articulated by them. The lack of phase-plans remains a curse.

I also liked how the World Heritage Site status has encouraged the logo to be integrated into the recently refurbished visitor centre. 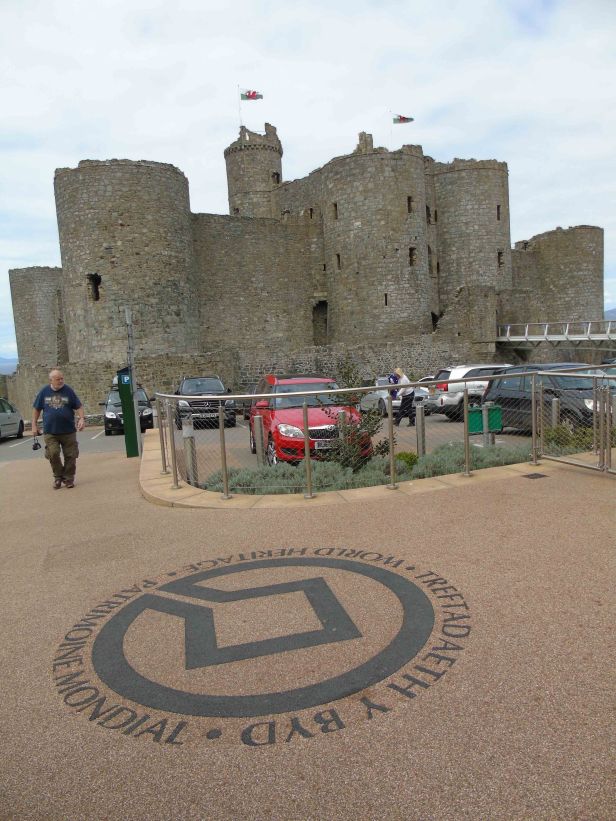 I have mixed feelings about the new visitor centre itself. This is because I disliked the audio-visual portrayal of the history of the castle and my kids were utterly confused by it. Otherwise, it was a great visit in which my kids and I explored the inner ward, down to the water gate and also talked to re-enactors about early fire arms and cooking.

I also liked the spolia piles at Harlech – one of shot, one of masonry.

What I’d like to focus on in this blog is the sculpture outside of Harlech Castle. Opposite the toilets and just down from the car park beside the visitor centre, this sculpture dates from the 1980s. It depicts the legendary Bran the Blessed, king of Britain, and his nephew King Gwern. The latter had been burnt alive during conflict with the Irish. The plaque reads:

The Mabinogion story of Branwen is a lament over the folly and carnage of war.

Branwen, sister of Bendigeidfran, the King of Britain, departed from the court at

Harlech to marry the King of Ireland. Their son, the boy King Gwern, was killed

In the war which followed.

In the sculpture, the figure of Bendigeidfran, bearing the body of his nephew

Gwern, symbolises the sorrowful burden that love can be.

Commissioned by the Welsh Arts Council and presented to the people of Wales in 1984. 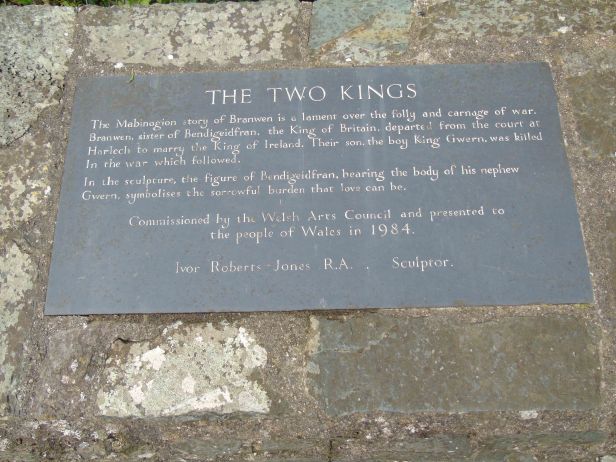 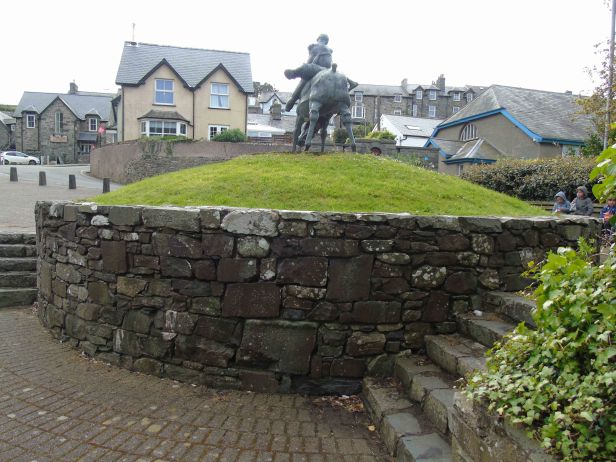 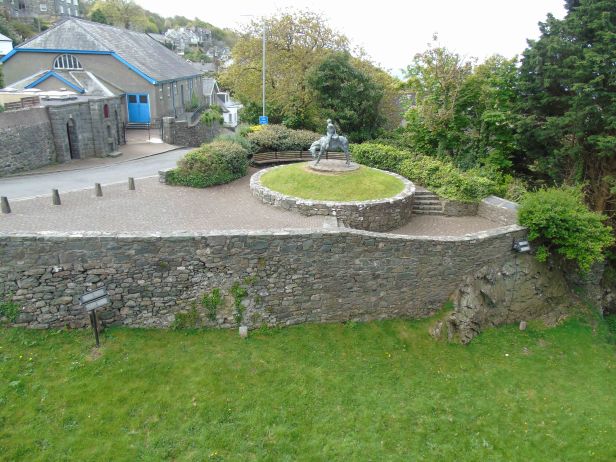 The figure on the horse, the seemingly frozen posture of the beast and those upon it, subverts the standard impression afforded by equestrian statues: namely that of an empowered walking or trotting rider. Furthermore, the sombre mourning of the scene is further articulated in the stiffness of the figures – one alive and upright, one horizontal and dead, thus mirroring each other. Horse, king and his nephew all appear in mourning, looking down towards the earth. A forelorn depiction of loss and love if ever there was one.

While the plaque explains the sculpture itself, nothing is said of the setting – a paved area and benches facing the castle, central to which is a circular kerb of stone. The sculpture sits central to this, on a circular mound. I think the intention is to evoke a prehistoric North Welsh burial monument, akin to that beneath the Pillar of Eliseg. The past, legend and death are combined through this setting as much as via the figural art. Indeed, the wall surrounding the gardens and continuing to demarcate the moat is commemorative in itself. 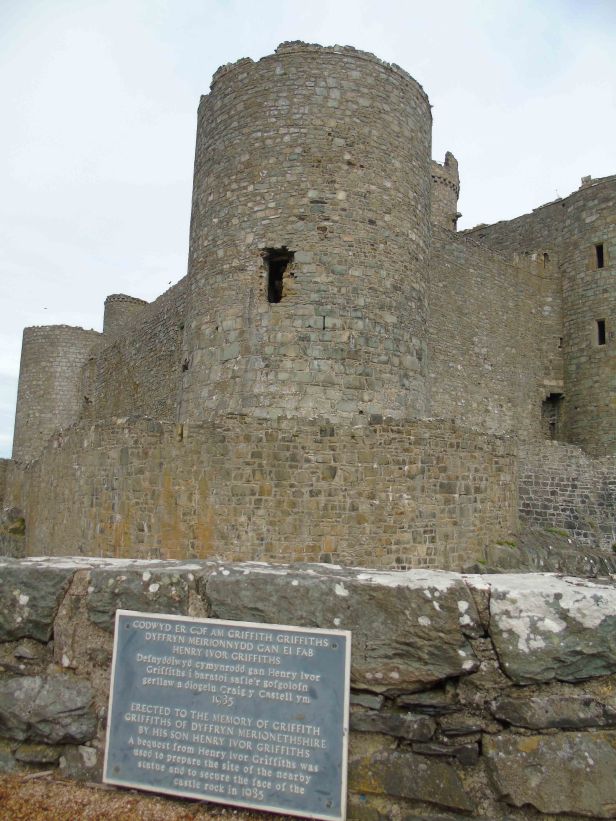 So the space is commemorative and the statue evokes Welsh legend and Bran’s court at Harlech. Together, we see the use of legend not to create fantasy around the ruins of the castle itself, but to evoke the subaltern of Welsh associations with Harlech in the deep, legendary past that have no material trace otherwise. Moreover, the anti-war sentiments of the sculpture challenge any attempt to valorise the militaristic associations of the castle.

The recent heritage interpretation of the castle itself deploys the image on the battlements, implying it was a place of legend by the later Middle Ages. Again, this is valuable, since it counteracts the lack of material evidence for an early medieval site here. If one had existed, it was long removed by the construction of the 13th-century castle.

Now this is one example of a broader theme, and perhaps one of the oldest of its kind. I therefore wonder if it was indeed the progenitor of art installations drawing on neo-medieval imaginings in order to counterbalance the narrative of English colonialism concerning the castle’s construction and use. All too often these fulfil a pan-Welsh nationalist agenda, but at least they offer complexity and diversity to the narratives of the ruined castles, and connect visitors to the contested nature of these monuments. Other examples I’ve addressed on this blog include the Gwenllian monument at Kidwelly, or perhaps also the silver knight sculpture at Llandovery Castle.

In an international climate where simplified and racial visions of the Middle Ages are repeatedly appropriated by the far-right, we must be critical of romanticised and mythical evocations in the heritage interpretation and artistic installations at Welsh and English castles, as well as those farther afield.

Yet the choice of legendary Welsh theme from the Mabinogion countermands the English colonial narrative of the castle. Both of these are in turn challenged via the sombre mourning of the king and his nephew, prompting reflection on the costs of war past and present. The focus is on peace, the horrors of war, framed within myth, not some delusional call to arms predicated on legend.

10 thoughts on “Welsh Myth at Harlech”