A few months back, I walked along one of the more southerly sections of Offa’s Dyke as it follows the eastern side of the River Wye. I was struck but its scale and character of the bank and ditch as it traversed steep slopes and complex topography and would have once dominated the land to its west. I was also taken by the amazing survival of quarry ditches that survive and have received little attention or survey. I learned a great deal about the monument by walking this length, even if my photographs struggled to pick out the monument’s true magnitude and design dimensions.

I also gained a greater appreciation of its differential survival in different topographical and geological situations, and the effects of different historical land management on the apparent scale and character of the monument. All this is helpful me to appreciate such an earthwork monument of an unprecedented scale.

I also got to pay attention to how the monument is managed and signed as part of a national trail: the Offa’s Dyke Path.

As I have previously discussed for Selattyn, the signs along the dyke are more than markers which guide walkers, they chart the history of the Offa’s Dyke National Trail: a route which for 45 years has become one of Britain’s most successful intersections between heritage, conservation and leisure.

Here I discuss the section from Bigsweir to Redbrook. The signs on this section are of different materials and styles, and they show the accrual of signs over time. The distinctive acorn symbol denotes the status and significance of the trail and serve to commemorate it. There is a clear shift in materiality from older ones are in wood, the newer in metal. 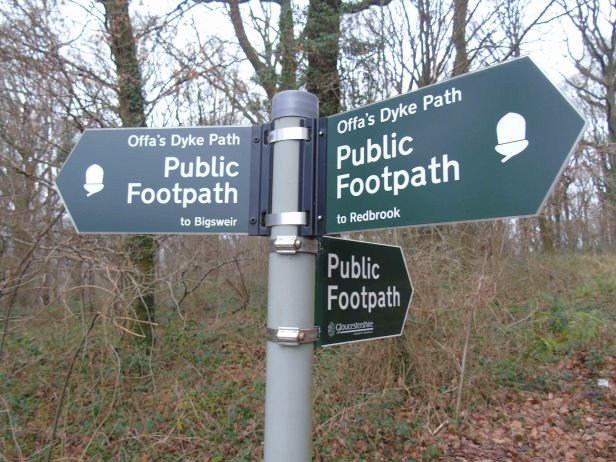 More common than both these materials are small circular plastic arrow signs, pinned to posts and trees.

I liked the multiplicity of signs upon the same post in some instances. As such, they point in the same direction but mark the overlapping different institutional and legal statuses of the route – denoting different land managers, public footpaths and the Offa’s Dyke Path itself.

There is also something vaguely comedic about the contradictory directionality of signs… I was also intrigued by the evidence of sign biographies. Some are broken. In other instances there are traces of earlier signs beneath the later replacements.

There is also a heritage sign in a state of some disrepair. The sign includes a map and an artist’s impression of how the dyke might have once appeared. It tells us it was the ‘ancient border of England and Wales’, which is of course anachronistic since neither Wales nor England existed at the time. It also presumes the dyke operated as a ‘border’, something which glosses over multiple potential functions. If it had a border role, Offa’s Dyke might be seen as participating in it slow process of creation.

The trail passes through woodlands managed by the Woodland Trust and there was a welcoming sign.

There were also a sign board by Natural England about Highbury Wood National Nature Reserve on the line of the dyke.

I also encountered the Woodland Trust’s deployment of commemoration as a means of funding its activities. Upon a low post in the woods beside the dyke was a plaque dedicated to the memory of a couple from the West Midlands.

I also encountered a broken-up seat with a memorial plaque, again from the  Woodland Trust.

Then there is the informal commemroation of grafitti: beech trees carved with initials and dates.

In summary, the experience of walking the Offa’s Dyke path is a mnemonic one, since it involved encountering signs and the inscription of signs. Some are overtly commemorative, while others simply impress the scale and character of the monument as well as guide walkers. What is clear is that Offa’s Dyke is now more than a linear earthwork, it is a network of signs.