Running for 38 miles, seemingly continuously from the Dee estuary at Basingwerk to Maesbury Marsh south of Oswestry, Wat’s Dyke is the second longest earthwork known from early medieval Britain, only over-shadowed in scale by its neighbour: Offa’s Dyke.

As Cyril Fox put it:

‘Wat’s Dyke, throughout its course from the Dee to the Middle Severn Valley, marks the boundary between the lowland of the English Midlands, and the hill country of northern Wales’ (Fox 1934, 211)

‘is designed to include as much country as lowlanders could conveniently occupy or control’ (ibid.).

This west-facing earthwork, was thought by Fox, and subsequent by many other scholars, as a less grandiose and shorter predecessor to Offa’s Dyke (Fox 1955; Ray and Bapty 2016). Building on Fox’s first important and systematic survey, the last half century has seen the work of many small-scale interventions by commercial archaeologists revealing its morphology at particular points but yielding no dating opportunities. Likewise, the long-term survey and excavations by David Hill and Margaret Worthington (involving over 60 interventions on its course) have served to both confirm and extend Fox’s inferences regarding its continuous and coherent construction and the lack of demonstrable gateways along its course (Worthington 1997; Hill and Worthington 2003; Worthington and Grill 2015). This work as corrected misunderstandings by Fox, although much of it remains partially published or disparately published. For instance, many steep scarps where Fox thought the monument was absent have been reinterpreted by Hill and Worthington’s fieldwork, confirming the dyke’s presence. The consensus has remained, however, that Wat’s Dyke was earlier than Offa’s Dyke: a monument of the 7th or 8th-century kings of Mercia, perhaps built by the powerful Mercian ruler who preceded Offa: Aethelbald (r. 716-757).

A decade ago, the opportunity for a large-scale opening of the earthwork ahead of development at Gobowen, allowed a more extensive excavation of Wat’s Dyke. Crucially, this facilitated a dating programme of the monument by Laurence Hayes and Tim Malim at this location (published in Hayes and Malim 2008). Their work suggested that Wat’s Dyke might well be later, not earlier, than Offa’s Dyke by between a decade to perhaps half a century. This might be crudely summarised as suggesting Wat’s Dyke was a 9th-century monument with a ditch to rival in size that known from many stretches of Offa’s Dyke, even if the bank itself seems less monumental than achieved for parts of Offa’s.

The implications of this work have really yet to fully percolate academic debates, let alone heritage interpretation. As a successor to, rather than a predecessor to, the late 8th-century Offa’s Dyke, it was perhaps the work of King Coenwulf, whose reign was dominated by accounts of campaigns against his Welsh foes. The king died at the northern end of Wat’s Dyke: Basingwerk. It might equally have been the work of his successors.

Whoever built it, it clearly aimed to stop up the clear gap in the northern extent of Offa’s Dyke and this might plausibly be regarded as a response to the increasing military power and influence of Gwynedd along the Flintshire coast and areas formerly dominated by the kingdom of Powys in the early 9th century. Consequently, it was Wat’s Dyke, not Offa’s Dyke, that defined the frontier to the Norman Conquest, as indicated by Margaret Worthington’s work on hidated and unhidated manors at Domesday, whose distribution corresponds to the line of Wat’s Dyke (hidated on the ‘English’ side, unhidated on the ‘Welsh’).

This is by no means certain, of course, and conversely, Ray and Bapty (2016), in their new book on Offa’s Dyke, venture an alternative suggestion. They argue that Wat’s Dyke might have been integral part of an Offan frontier, and thus an extension of, and perhaps used contemporaneously with, Offa’s Dyke.

So Wat’s Dyke mapped out and perpetuated a geo-political faultline in the Early Middle Ages between the powerful kingdom of Mercia, itself fluid in its fortunes and scale, and a series of British rivals to the west. In this frontier zone, Mercia had absorbed local politics during the 7th century and may have cultivated a distinctive linguistically and culturally variegated population living and working on either side of linear earthworks built as both defensive and aggressive statements and territorial devices. Offa’s and Wat’s Dyke might be seen as successively offering visually control land to the west and manage/restrict the movement of people and resources along and across their lines. They were also ideological statements of Mercian hegemony, as Ray and Bapty articulate in their new book.

What is clear, however, is that Wat’s Dyke, despite running through historic landscapes and NE Wales’s largest conurbation – Wrexham – remains poorly appreciated and understood, including by heritage professionals. A primary school is named after it, a few roads, but it is generally ambiguous in the consciousness of historians, archaeologists and local people.

I recently visited the National Trust site of Erddig to explore the house, gardens and woodland, as well as to revisit the site of the earth-and-timber Norman castle there overlooking the Clywedog. Wat’s Dyke runs through it along the top of the eastern slope descending from Erddig Park to the Black Brook, and running into, and obscured by, the later castle on the promontory. My former student, Rachel Swallow, has discussed this castle and suggested its relationship with Wat’s Dyke is far from coincidental (Swallow 2016).

I would suggest that very few visitors to this property appreciate the true importance of the landscape here for understanding the monument, and the long-term history of the Mercian frontier and subsequent Anglo-Norman March of Wales.

Wat’s Dyke survives in key stretches near Erddig Hall. Fox regarded the flanking spur of the motte as ‘almost certainly not, in its present form, Wat’s Dyke’, and it fades to a berm beside the motte. But then, to the south from the castle:

… then as the W. slope eases, a bank appears. This bank ends in the artificially levelled flat by E of Erddig Park. The sequence of earthwork forms, dependent on terrain, is normal; and wholly, or in part, the structure must be recognised as Wat’s Dyke. The Dyke probably existed, but has been destroyed, in the neighbourhood of the house [Erddig Hall], but traces of both bank and ditch are again present at one point a little farther on, on the edge of the steep wooded slope above the valley floor, by the rookery. A little farther on again, the steep and regular contour of this river scarp is broken by two small re-entrants. Here, the large and characteristic structure of the Dyke reappears, the intervening spur being cut off by a large bank and ditch (scrarp 22 ft, overall 48 ft), and the furst spur isolated in a similar manner.

Fox surveyed in particular by the Rookery and included a profile of the monument at this point. However, there are 7 successive points to make here about this stretch in the wood between the castle and Erddig Hall that seem to contrast with the way the monument has been described in the publications by Fox (1935) and Worthington (1997):

I’m happy to concede if I’ve misunderstood the monument or identified a section modified in later centuries. Still, the obvious solution is that it is best regarded here as twin-banked monument, or that its counterscarp on the tip of the slope was accessible for surveillance into the valley and served as the primary defensive feature, not the ditch and bank to its rear. 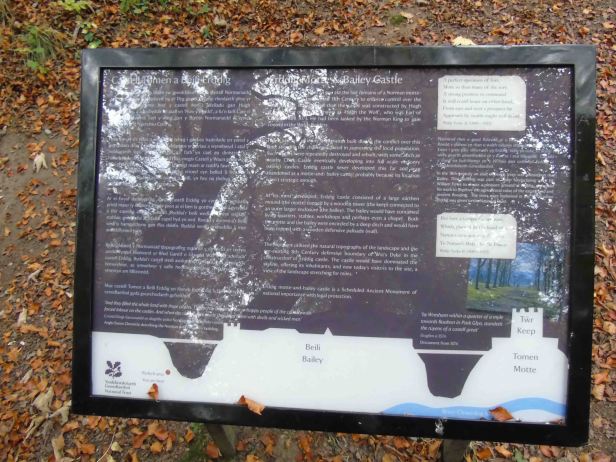 Of course, following my recent critical discussion of the display of the dyke at Chirk, you might guess where this is going. It is clear that the monument is not fully understood and the one new NT sign board (beside the entrance to the castle), while creating a striking cross-section visualisation of the motte and bailey of the Anglo-Norman castle, renders Wat’s Dyke incomprehensible because:

In summary, more consideration is needed to understand Wat’s Dyke in this location and explain it to visitors.

Hayes, L. and Malim, T. 2008, The date and nature of Wat’s Dyke: a reassessment in the light of recent investigations at Gobowen, Shropshire, in S Crawford and H Hamerow (eds), Anglo-Saxon Stud Archaeol Hist 15, 147–79.