Medieval halls had life-histories: they were born, they grew up, they grow old, and they died, sometimes in violent circumstances and sometimes by fire. They could be destroyed by enemies, or put to death to coincide with the deaths of key occupants by their survivors. Halls therefore are tied to the rhythms of intergenerational family fortunes: they rise, they fall.

Such themes flit around  the burning of buildings in Game of Thrones; the television series inspired by George R. R. R. Martin’s books. 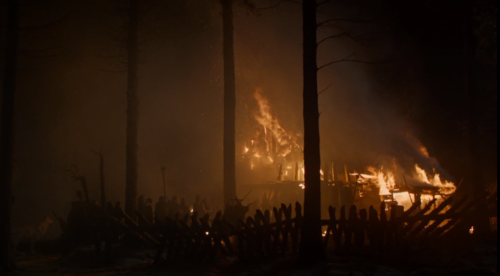 I’ve previously discussed cremation in the popular HBO series in Season 1 (Dothraki/Valyrian), Season 3 (Tully) at Riverrun and Season 3 (Night’s Watch) at Craster’s Keep. Yet it is in Season 4 that things really heat up.

In Episode 5, a hall-burning takes place. Jon Snow and volunteers from the Night’s Watch retaking Craster’s Keep and killing the traitors who had slaughtered Craster, their fellows and the Night’s Watch’s Lord Commander. In doing so, his brother Bran and his friends escape unseen. Meanwhile, Snow and his warriors liberate Craster’s many wives who decide to head off on their own.  Before they head back to the Wall, they burn down Craster’s Keep, thus cremating all the dead bodies within.

This dramatic hall-burning is a lingering scene involving multiple angles onto the conflagrating structure and the survivors watching on. This event signals the dramatic destruction of the dire abode of Craster and all the foul deeds that took place within. It isn’t rendered a ‘cremation’ per se, but it is a moment of solemn reflection on the place before they depart and the fiery destruction of bodies and building are intertwined.

It reminds us of hall burnings of Icelandic sagas and it is a striking example of mass cremation within a building has an enduring appeal as spectacle and transformation: both world-ended and world-renewing.