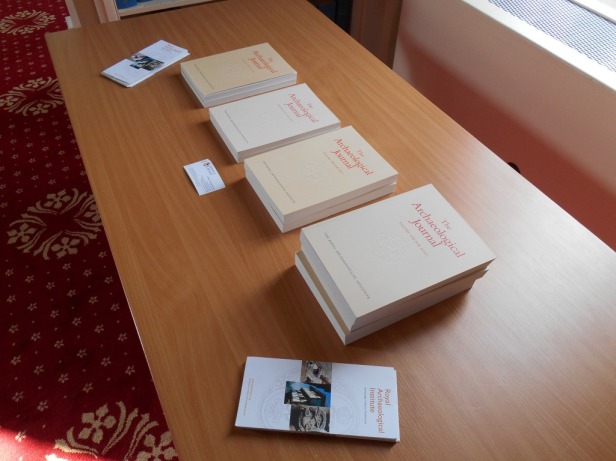 Well, it has been a crazy and busy year as Honorary  Editor of the Royal Archaeological Institute’s Archaeological Journal. I produced my first volume (vol. 169 for 2012) for the autumn of 2013 on the established schedule of production. It then became clear that, in preparation for entering a new publication contract with a commerical publisher, the RAI had to start getting the journal out in the year on its cover, not in the year subsequent. So, just over a year ago, 6 months earlier than previously, I brought out vol. 170 for 2013. Hot on its heels in the autumn of last year we published vol. 171 for 2014, bringing the journal publication schedule into the year on its cover for the first time ever. 3 volumes in my first 2 years as Honorary Editor was pretty exhausting.

What have I been doing in the last 12 months? I have now just finished work on vol. 172 for 2015. This is the first volume to be published in partnership with Taylor & Francis (Routledge) and it is already published online as two issues, one in January 2015, one this month (June 2015). This is a major achievement for me and the RAI, involving subtle changes to the appearance of the journal, while keeping the font and design as close to its existing look as possible. It has also involved considerable extra working on a new schedule, with a new electronic production system, and with a new production team at Taylor & Francis trying to iron out all manner of issues.

Another major shift in the Journal has been that the  journal is now fully and comprehensively available online via the T&F website. A full 172 years of archaeological knowledge and research. So if you are an RAI member or have library access, why not check out both current and past issues? The print version of volume 172 will be distributed this summer to members and subscribing libraries.

Also, I have been busy editing the 2014 Summer Meetings Report. This is a supplement to the Journal, produced each year and including a report on the previous year’s summer meeting. Apart from the years affected by the First and Second World Wars, every summer since 1844 the RAI have visited a city or region and explored its landscapes, architecture, sites, monuments and museums. Last year was the turn of the Scottish Borders, and the report on the Tweed Valley will be distributed with the Journal.

Why not join the RAI and get online access to these, and all previous volumes? Individual members can join here.

All this work would not have been possible without the support and work of my many anonymous expert referees, the Reviews Editor Kate Waddington, outgoing RAI President David Hinton, RAI Treasurer Andrew Williams, RAI Administrator and RAI Honorary Secretary Pete Wilson. My editorial assistants for vol. 172 – Anna Mackenzie and Ruth Nugent – also both deserve thanks and praise.

What of the future? The RAI have agreed that they want me to continue as Honorary Editor for another two years, editing vol. 173 for 2016 and 174 for 2017. Next year, they will be looking for a new Honorary Editor to replace me in May 2017.

Here is the final list of contents of articles in vol. 172. I hope you find something of interest!

The Life and Times of a Chambered Tomb: The Results of Survey and
Excavation at Blasthill Chambered Tomb, Kintyre, Western Scotland
VICKI CUMMINGS AND GARY ROBINSON

The Post-Roman Foreshore and the Origins of the Late Anglo-Saxon
Waterfront and Dock of Æthelred’s Hithe: Excavations at Bull Wharf, City
of London
JULIAN AYRE AND ROBIN WROE-BROWN

The Eleventh- and Twelfth-century Waterfront and Settlement at
Queenhithe: Excavations at Bull Wharf, City of London
JULIAN AYRE AND ROBIN WROE-BROWN

The Clacton Spear: The Last One Hundred Years
LU ALLINGTON-JONES

Foxes and Badgers in Anglo-Saxon Life and Landscape
KRISTOPHER POOLE