Increasingly, sensitivities towards the display of the dead in British museums have seen repatriation and reburial of some international holdings but also greater care and attention afforded to how and when human remains are put on display. A recent visit to Leeds City Museum illustrates this trend in both its permanent displays of the archaeology of the ancient world and its hosting of the British Museum’s travelling exhibition ‘Roman Empire’.

This blog is not aimed to be a criticism of Leeds City Museum per se, but their displays inspire a broader consideration of the question: do we still need human remains in British museums?

Recent visitor surveys tell us the British public’s answer to this question is a strong: ‘yes please’. Meanwhile, archaeologists in the UK have argued on multiple grounds that human remains are a integral part of how we understand about past lives, health and disease as well as past death ways. Sociologists have also critiqued the move by some curators towards a removal of human remains.

Despite this, some museums persist in restricting the display of human remains and, in previous blogs, I have criticised this trend. Yet human remains in British museums remain commonplace. Questions remain about how we display this sensitive material with respect (to past cultures, communities and individuals, as well as to various groups who regard themselves as spiritual or biological descendants of these groups), with sensitivity (so as not to disturb, shock or upset visitors) and academic integrity. Perhaps equally important to all of these dimensions is how we display the dead in effective ways for visitors to comprehend. Let me explore Leeds City Museum as an illustration of the challenges we still face.

Death in the Ancient World

This permanent exhibition at Leeds City Museums contains some superb examples of Greek and Roman funerary sculpture including portions of marble tomb doors from the Hellenistic period (300-100 BC), all well-lit and with clear, short clear labels. There are few portable material cultures, few illustrations or other media to help afford context to these artefacts, however. Therefore, one wonders whether visitors are getting a satisfactory sense of the character and contexts of mortuary practices in the ancient world, without either context or human remains. Admittedly space is restricted and many items were acquired without provenance.

In contrast, within this exhibition there is a special section warning you that the ‘ancient Egyptian person’ lies within. Human remains are thus marked as ‘special’ and treated distinctly. The sign says that no photography should take place to show ‘respect’ for the dead. This is an interesting and unexplained statement: the visitor isn’t told why photography is disrespectful to the dead if viewing the corpse is sanctioned. Were the Egyptians perhaps particularly advertise to flash photography, or might photography be a concern on conservation grounds? One is left with a confused sense that ‘respect’ for the dead by looking but not taking pictures that might remind you of the visit. Anyway, I did take a pic, and if this causes offence to Egytians past and present – or indeed anyone – do let me know. It might be my first pic of an ancient Egyptian on my blog…

Within, one finds two low-lit Egyptian sarcophagi, the mummy and a facial reconstruction, all superbly displayed and with informed textual explanation. Yet again, however, context is lacking. How does this relate to Egyptian mortuary traditions more broadly and did everyone get mummified? Equally important: why are mummifies displayed but not other human remains?

This travelling exhibition has a rich range of artefacts from across the Roman world on loan from the British Museum and it is a real treat for any visitor. For example, there was a fabulous trio of text-inscribed marble burial chests, two from Ephesus, Turkey (one commemorating a solider and another to a family with inscriptions in both Latin and Greek) and both dated between AD 50-100. The third marble chest is dated to AD 100-200 and is without provenance. No human remains are displayed.

The visitor is left to infer that these chests would have originally served to contain the cremated remains of the dead. Furthermore, in two out of three cases the texts make it clear that the intended occupants with multiple in number. Others remains may well have been added subsequently. Therefore, these are not simply chests for individual cadaver’s ashes, but the repositories for multiple individuals.

Likewise, the relationships between further fragments of gravestone and tombstones with possible mortuary contexts, while perhaps unknown for the specific pieces on display, is afforded limited attention. The display of mummy portraits and cinerary urns helps to provide some context, but one can think of many more examples where more effective attempts to evoke context and mortuary variability have been attempted within Roman displays in local and regional museums. 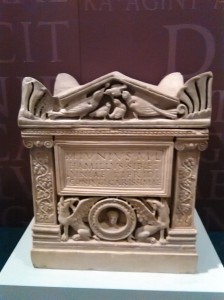 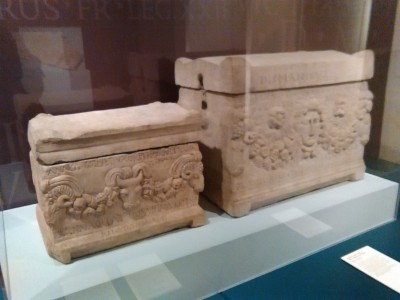 I have not conducted detailed research into the specific decisions made by Leeds City Museum or the British Museum: I offer only visitor impressions. Hence,  I am very happy to be corrected by their curators in my account and add details. Regardless, my points of criticism are far from unique to Leeds City Museum and should not be taken as an attack on this institution or its curatorial staff.

I am a staunch defender of the display of human remains, where carefully considered and regarded as justified on educational and scientific grounds and with adequate warnings for visitors regarding the content of exhibitions. Therefore, I am minded to be critical of Leeds City Museum’s choice to have such an a dearth of human remains outwith the inclusion of a mummy without a sheltered gallery. The absence of the dead in the main exhibition spaces impoverishes these displays.

However, I am equally a staunch advocate of the fact that archaeologists can and should consider how material cultures can convey stories of life and death in past societies without the lazy short-hand of sticking in a skeleton or mummy. Human remains should be there, but only when and how they actively assist the visitor in their understanding of the mortuary contexts being displayed. The Leeds permanent and temporary exhibitions both reveal how much can be told about the variability and complexity of practices and beliefs about death and the afterlife in the ancient world without resorting to human remains. After all, archaeology is about the imagination, and we operate in a cenotaphic culture where dead bodies are always absent. Do we really need skeletons to engage with mortality in museums? I would suggest not always. The Leeds City Museum also shows how human remains can be effectively incorporated and sensitively displayed with warnings for visitors and suggestions of appropriate conduct.

So, do we need human remains in British museums? I would remain an advocate that we should say ‘yes’, where justified and contextualised they can enrich and enhance appreciations of life and death in past societies. However, from the perspective of a mortuary archaeologist, I still find that the absence of human remains offers opportunities as well as challenges and the rich and varied funerary remains on display at Leeds City Museum show that we can do without human remains. After all, death rituals in the past were about the living and material cultures, as much as about corpses.

Perhaps it is not really a question of whether human remains should be on display or not. On reflection, I wonder whether another question is more pressing: are we doing enough to explore past mortuary change, variability and contexts in museums? For me, the answer to this question is still a strong and stern: ‘no!’ While I appreciate museums face many pressures on time, costs and expertise, the real problem with museums displays of death, burial and commemoration in the human past is insufficient context (in the displays themselves, in supporting material on the website, and connections to pamphlets, guides and both popular and academic texts in the museum bookshop). I feel we still need the dead on display, but our great challenge is inadequate attention to context, not insufficient dead people.

10 thoughts on “Do we need human remains in British museums?”