I recently revisited the British Museum. I headed for room 41: the early medieval gallery. Now titled ‘Sutton Hoo and Europe: AD 300-1100’, this has recently been subject to a major renovation and re-display. It re-opened on  27th March 2014.

There was plenty to welcome about the new gallery. As an infrequent visitor to the BM (and I am sure this is true for many) I perhaps haven’t appreciated all the nuances and details of how this new display differs from the old. Sutton Hoo is now centre-stage and is a ‘gateway’ from which to explore the myriad dimensions of early medieval Europe on display around it. 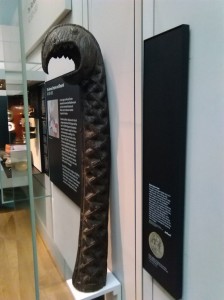 For many, they will find this a ‘classic’, simple and effective display of a rich range of late Roman and early medieval artefacts broadly arranged chronologically and geographically. There seems no logical or single route through the gallery, instead you have to find your own way, fluctuating forward and backward in time, circulating around the lavish Sutton Hoo assemblage.

In positive terms, I can say is that the vast majority of artefacts are superbly positioned, arranged and lit, making it a joy for visitors in these regards.  The gallery was overdue a fresh arrangement and interpretation in the light of changing views and approaches to early medieval Europe and in many regards this is all successful. Furthermore, there are effective displays of many individual spectacular finds including the Desborough necklace, the Franks Casket, the Fuller brooch and the Trewhiddle and Pentney and Cuerdale hoards and, where necessary, multiple views (from front, back and sides) of artefacts are facilitated. There is so much more from across Late Roman and early medieval Britain, Ireland, Scandinavia and Continental Europe it seems unfair to select out particular items, although I must say that my favourite of all is the stupendous Gallo-Roman ship’s figurehead; a terrifying beast to encounter indeed!

Together, the visitor is awarded with a condensed and powerful learning tool and spectacle of early medieval material culture difficult to match in local and regional museums despite the relatively small area utilised within the BM for this vast and complex period of Europe’s early history. This is backed up by Sonja Marzinzik’s book, giving an artefact-focused exploration of key ‘art’ from the early medieval period on sale at the museum shop.

Still, there are some points of criticism to be made and for simplicity’s sake I would like to identify three points:

Beyond these general points, I also have specific things to say about particular displays that touch on my interests as follows:

The early seventh-century princely grave from Taplow, Buckinghamshire, is one of my favourite early medieval sites and assemblages, subject of long-term study by the bright mind and articulate pen of Leslie Webster, former curator at the BM. In the next display, it was a real disappoint to me how little of the context of the grave, and the circumstances of discovery, are reported. For me, the Taplow display was something of a setback.

The Mound 1 Sutton Hoo treasure provides the focus of the renovated gallery and it is impressively arranged with helmet and shield positioned to afford nearly all-round views, silver to the left, and feasting gear and weapons to the right. There is an attempt at providing a broader context to the finds through a video.

If Taplow is a big disappointment, this was great for me. The temporary absence of the axe-hammer was a disappointment but at least an attempt was made to situate the artefacts in relation to the grave context. Still, I still think that most visitors will come away feeling that the only thing at Sutton Hoo was a single wealthy grave, and this is something of a frustration. I think its repositioning means that it does effectively serve as a ‘gateway’ to early medieval Europe, but perhaps it is still at the expense of a fair representation of the site of Suton Hoo. Still, there is the National Trust site to visit to complement this.

A small, very modest part of the new display focuses on early Anglo-Saxon cremation practices; the subject of my doctoral research and the hard work of a number of other scholars have the last 30 years, notably Julian D. Richards, Jacqui McKinley, Julie Bond, Mads Ravn, Kevin Leahy, Catherine Hills and (most recently) Kirsty Squires.

Disappointingly, no cremated human remains are displayed to help convey the character of this kind mortuary practice. Given the communal cemeteries in which they are found, it is also disappointing that no sense of the proximity and relationship between cremation burials, and between cremation and contemporary inhumation graves, is articulated.

Still, ,there is a cinerary urn and items retrieved from a cremation urn: toilet implements and comb. The items are apparently from ‘possibly Lancashire’ (which is a mistake if I recall correctly, I vaguely recall reading how J.N.L. Myres argued long ago that this is probably a Spong Hill urn). The other items on display – iron razor, bronze tweezers and a triangular antler comb – these three items seem to be from Eye (Suffolk), Mucking (Essex) and Northfleet (Kent) although this is an example where the poor labelling makes it impossible to know which item is from where and no precise interpretation and description of each item is afforded. I think the antler comb is from Eye, since this is depicted in the pages of Akerman’s Remains of Pagan Saxondom.

There is a miniature representation of how a cremation pyre might have been arranged and also a caption that seems to adopt an interpretation of mine regarding the toilet implements and combs found in early Anglo-Saxon cremation burials. This is a personal highlight and flattering that my ideas, or at least simplifications of my ideas, have found their way into this illustrious museum setting.

Thanks and congratulations to the curators; but this collection deserves four times the space the BM gives it!

9 thoughts on “Anglo-Saxon Death at the British Museum”