Recently I visited one of the most fabulous castles in West Wales: Dinefwr Castle Its surrounding woodland are under the ownership and management of the National Trust and the castle itself operates under Cadw stewardship.

I spent much of the day in meetings and doing indoor research, so I didn’t get a chance to explore the full estate and the post-medieval Newton House. However, I did get the opportunity to explore the ruins of this 12th-century and later fortification and subsequently a prominent romantic ruin situated in wooded parkland.

The site is mainly understood from its above-ground remains: there have been no significant modern excavations.

Context is everything in our understanding of Dinefwr. With views over the Twyi valley, it was possibly an Iron Age hillfort and certainly a Roman fort was situated close by. Subsequently, Llandeilo might have been an early medieval monastic foundation, evidenced by Early Christian stones. This ancient landscape was an apposite backdrop to the assertions of authority, power and wealth of the princes of Deheubarth for the Lord Rhys and his son Rhys Grug, although the latter was forced to dismantle it by his overlord Llywelyn the Great of Gwynedd.

Dinefwr figured in the later 13th-century conflicts with the English, with the castle under Rhys Fychan and Rhys Wedrod. The castle then fell into English hands following the campaigns of Edward I and further developments, including the hall in the north might reflect repairs and improvements through into the early 14th century. Despite poor maintenance, the castle resisted a siege by Owain Glyndwr’s forces in 1403. Later, further Welsh lords occupied the castle, including Gruffydd ap Nicholas and his son Rhys ap Thomas (who did all Leicester archaeologists a great favour by participating in the battlefield killing of Richard III). Rhys is thought to have undertaken significant alterations of the castle.

In the 18th century, the castle gained a new lease of afterlife as a romantic ruin with a summer-house added to the top of the keep, giving it its distinctive appearance to this day within the grounds of Newton House; the new Dinefwr Castle to the north-east. Indeed, people may have been looking out from here to see Paxton building his even more grand version in neo-medieval style to the east: Paxton’s Tower.

Visiting today, most of the impressive ruins relate to the inner bailey – the outer bailey is largely earthworks. The most prominent dimension of the inner ward is the circular tower. It may indeed have been one storey higher still before conversion into a summer-house. The hall range and its tower were significantly altered in the Tudor period.

Two medieval towns once surrounded the castle, first the Welsh one and later an English one; their traces have long been lost in the creation of wooded parkland of the Dinefwr estate’s landscape designs of the 17th, 18th and 19th centuries.

The other striking feature of visiting the castle is the amazing close-proximity interplay with the ruins of Dryslwyn Castle to the east along the Tywi valley and Paxton Tower skylined beyond. Indeed, these castles share a Cadw guidebook to this day!

I have already posted about the hazard warning signs but I want to add that the NT heritage boards make striking use of tree trunks, embedding them into the woodland landscape in which the castle is situated.

No real archaeodeath dimensions here, but a fabulous example of the power of place that may have informed not only the citing, but the persistent importance of Dinefwr down the centuries. 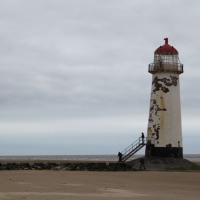 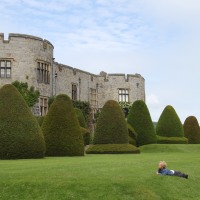