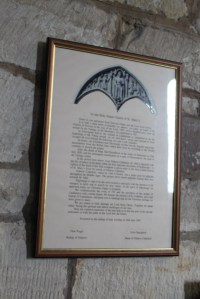 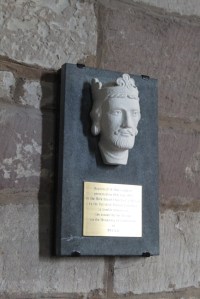 In a previous blog, I noted how the Norse raid of AD 793 on the monastery of Lindisfarne is used as a selling point for visitors to the heritage site. However, there are few traces of its physical manifestations, legacy and commemoration beyond the textual sources for visitors to engage with. Perhaps this is for the best…

However, during my earlier visit I missed the most important physical trace of the AD 793 raid. This is because I didn’t get to go into St Mary’s church because there was a service in progress.

I have witnessed the two most important physical traces of the commemoration of the Viking raid, marking the 1200th anniversary. In 1993 the church of Nidaros, Norway, visited and delivered a letter apologising for the attack and situating the raid in a positive light as leading to the conversion of Norway. Next to the letter is a gift; a replica of a medieval sculpted stone head of St Olaf presented to the church of Lindisfarne on that anniversary.

In short, the Norse said sorry in 1993, a good 1200 years after the events. The letter and the stone head of St Olaf are on display within St Mary’s church for all to see. I guess it is implicit that the people of Lindisfarne accepted the apology.

Some might see this as a somewhat bizarre or even perverse use of anniversaries. It is certainly a very distinctive attempt to write a positive Christian message from this brutal event. I leave that for you to decide dear reader.

What is certainly clear is the wider context of this kind of historic anniversary. For me, I feel that anniversaries are an insidious zombie virus in Western commemorative practice. Everything has to have an anniversary and everyone feels compelled to respond, shambling forward towards unclear goals with awkward and ill-considered movements along ill-designed pathways… Academics are regularly infected too, obliged to produce even more conferences and books to mark anniversaries that have little real meaning or significance to anyone. Whether the Vikings are really saying sorry or not, be wary of the zombie virus dear reader, it will get us all!